The women of “The View” aren’t too pleased that Nancy Pelosi was barred from receiving communion by a San Francisco archbishop, so on Monday’s show, Whoopi Goldberg called him out.

On Friday, Salvatore Cordileone denied Pelosi communion, based on her stance when it comes to abortion rights. In a letter to the Democrat, Cordileone wrote that “should you not publicly repudiate your advocacy for abortion ‘rights’ or else refrain from referring to your Catholic faith in public and receiving Holy Communion, I would have no choice but to make a declaration, in keeping with canon 915, that you are not to be admitted to Holy Communion.”

At that, Whoopi Goldberg seethed a bit, pausing to make a noise of distaste while even explaining the situation. 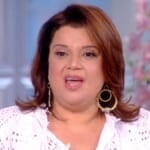 You can watch the moment from “The View” in the video here and below.

Whoopi then added that Pope Francis would be the religious leader whose opinion would matter here, rather than Cordileone, and that this situation starts to “blur the lines between church and state.”

From there, the women at the table expanded more on their issues with the Catholic church in general, pointing out the many PR gaffes it has had over the years. Shortly after the show, Goldberg began trending for her comments, with many arguing that the decision to give anyone communion does indeed fall under the purview of the Archbishop.