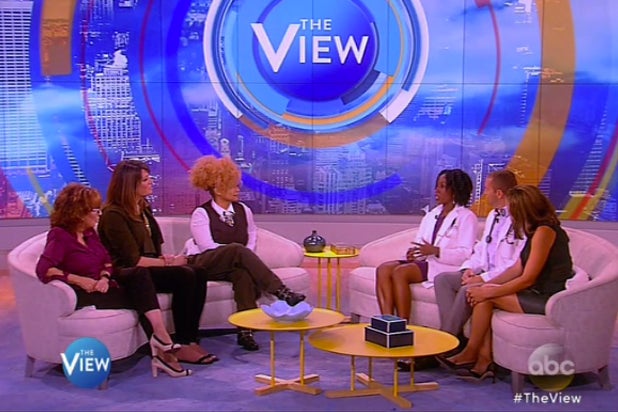 “The View” panelists welcomed nurses to the show Friday, in a make-good for the controversy that began with comments on Monday’s episode that seemed to downplay the role of nurses.

“After we made comments about the Miss America broadcast and the talent performance by Miss Colorado, we heard from many of you,” Joy Behar said on the show. “You let us know you were offended by some of our comments and believe me, we were listening. We apologize for our remarks and we know how vitally important nurses are.”

Behar went on to say they didn’t just want to leave the issue behind with an apology and brought out two nurses and teachers from the New York University School of Nursing to discuss the day to day challenges of their work.

“Thank you for having us on your show, we’re very honored to be here to represent our profession,” said NYU’s Assistant Clinical Professor Larry Slater. “With over 3.4 million nurses in the US alone and millions more around the world, it’s a little hard for me to speak on behalf of all of them, but I’ll give it my best shot.”

Slater, along with Kellie Bryant, NYU’s Director of Simulation Learning, went on to give more perspectives from the nurses’ side, stating that for 13 years running, nurses have ranked as the No. 1 most honest, ethical and trusted profession.

“Nurses come to the forefront a lot at times of tragedy,” he continued, referencing 9/11, hurricanes Katrina and Sandy, the 2004 tsunami and military nurses on the front lines of war.

“But the truth of the matter is there are countless heroic nurses that are impacting lives every minute of every day, without so much as a whisper,” he said. “They’re not doing it for the recognition, they’re doing it for the passion and the love and the impact they can have on those they care for.”

On Monday, Behar and co-host Michelle Collins had made some quips about Kelley Johnson, Miss Colorado, who wore a stethoscope and scrubs during the talent portion of the contest and performed a monologue about her work as a registered nurse.

The co-hosts’ observations didn’t go over well on social media, sparking several hashtags in support of the nursing profession, and ultimately leading to at least two major sponsors, Johnson & Johnson and Eggland’s Best, pulling advertising from the show.

“The talent, though, I have to say, the woman who won sang opera, and she was incredible. Really good,” Collins had said on Monday. “But then there was a girl who wrote her own monologue and I was like, ‘Turn the volume up, this is going be amazing, let’s listen.’ She came out in a nurse’s uniform and basically read her emails out loud and shockingly did not win … it was hilarious.”

“Why does she have a doctor’s stethoscope on?” Behar asked Collins at the time, who replied: “She helps patients with Alzheimer’s, which I know is not funny, but I swear you had to see it.”

On Friday’s segment, Behar brought up the stethoscope incident again.

Also Read: 'The View' Responds to #NursesUnite Backlash: 'We Love Nurses ... You All Deserve Raises' (Video)

“One thing that became abundantly clear to me this week was that nurses wear stethoscopes,” she said, prompting the panelists and guests to laugh, before Bryant got up and handed out stethoscopes to all the “View” ladies.

“Hopefully, by focusing on this today, we can help better understand and recognize the critical role nurses play in caring for others and making such a big difference,” Collins said at the conclusion of the segment, before dozens more nurses, all in uniform, were brought out onto the stage and applauded.