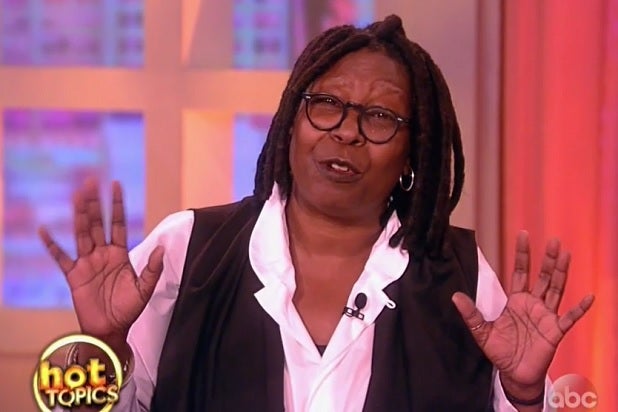 Hey, politicians; if you could steer clear of Whoopi Goldberg‘s reproductive system, she’d really appreciate it.

“The View” maven Goldberg weighed in on the newly revived debate over abortion during Monday’s episode, verbally placing a “No Trespassing” sign on her private parts where the government is concerned.

The declaration occurred during a discussion of an alleged video featuring a fully formed fetus kicking on a table, while Planned Parenthood employees discuss harvesting its brain. The existence of the video, which presidential candidate Carly Fiorina claims to have seen, has been questioned by numerous fact checkers, leading the “View” crew to ponder whether Fiorina might have been telling a whopper.

From there, the discussion expanded to the larger effort to de-fund Planned Parenthood, with Goldberg opining that doing so wouldn’t prevent women from obtaining abortions.

“If you think this is going to stop women from doing it, it’s not. People who are desperate enough to go and get an abortion, there’s a reason they need it,” Goldberg declared. “Get out of my vagina!”

Goldberg also dragged The Man Upstairs into the conversation, stating, “God said, ‘Come to me; if you have an issue, come to me. Nobody else can judge you.'”

Which didn’t stop Goldberg and her cohorts from rendering judgment on GOP candidate Ben Carson, who made headlines by declaring that he wouldn’t advocate putting a Muslim in the White House.

Pointing out that the Constitution bars applying a religious test as a qualification for holding office, Goldberg continued, “Keep in mind, Ben Carson, that’s what they used to say about black candidates. That’s what they said about [former Congresswoman and presidential candidate] Shirley Chisholm. She was a woman and she was black, so you know they went to town on her.”

“For an educated guy who is a minority to come out and say that, it’s so shocking to me,” Michelle Collins chimed in.

“If I’m looking at candidates and they’re they’re talking and showing blatant racism, why would you think I would vote for you?” added Raven-Symone.

Watch Goldberg and her cohorts in the video.