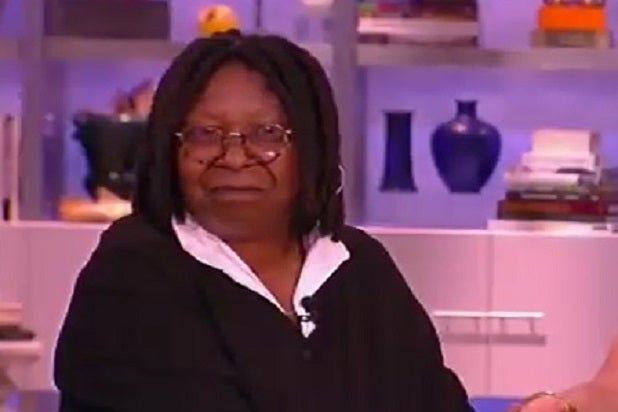 With the first presidential debate set to kick off Thursday night, “The View” co-host Whoopi Goldberg had some stern, scatological advice for GOP candidate and frequent “View” punching bag Donald Trump: “Poop or get off the pot.”

While the “View” panel agreed that viewer interest in Trump will be high due to the entertainment factor, Goldberg suggested that Trump needs to put theatrics aside and make his case for why he should be the Leader of the Free World.

Thursday’s episode also saw departing co-host Nicolle Wallace bid an emotional farewell to her cohorts, viewers and the series. Goldberg kicked off the goodbyes with a verbal sideswipe at ABC, saying that she was unaware why Wallace is departing.

“My friend Nicolle is leaving our show.  You’ll have to ask ABC why; I can’t tell you. I don’t know,” Goldberg professed.

In saying her goodbyes, Wallace reserved particular praise for Goldberg, noting, “I have fallen in love at first sight with three people: My husband, my son and Whoopi Goldberg,” Wallace said, choking up with emotion.

Wallace admitted that she doubted her compatibility with the show at first.

“When I tested last season I said, ‘I don’t know if I want to work there; I could never talk about my vagina on live television,’ and look how far I’ve come,” Wallace said.

Continuing with the “adios” theme, the “View” panel also touched on the departure of longtime “The Daily Show” host Jon Stewart, who’s exiting the politically-charged Comedy Central show on Thursday.

“He is one of the most intelligent broadcasters on the air; he doesn’t simplify anything,” Wallace noted. “I think he’ll have a long career and I’ll follow him forever.”

Thursday’s episode of “The View” also welcomed actor/comedian D.L. Hughley, who weighed in on Trump, opining that the more racist Trump seems, the more popular he grows.

“If he says the N word [during the debate], he’s gonna be president tomorrow,” Hughley offered, adding, “taking him seriously in a debate is like Flavor Flav winning a spelling bee.”

Hughley also took on former Olympian Caitlyn Jenner, repeating his previous assertion that he doesn’t find Jenner — who’s transitioning into a woman — attractive. Pointing out that the media has deemed tennis star Serena Williams masculine while declaring Caitlyn Jenner beautiful, Hughley assessed, “Let me tell you something; When I see Serena, I want to have sex with her. When I see Caitlyn Jenner, I hope we don’t get into a fight.”

“[Cox] went all out … she got the premium package,” Hughley said. “[Jenner] went to Earl Scheib.”