A slew of spine-tingling movies will make for a frightful second half of the year at the box office, which will see at least nine horror films debut including the latest from high-profile filmmakers including M. Night Shyamalan, Jason Blum and Guillermo del Toro.

“There are more horror movies this fall than we’ve seen in a long time, from familiar franchises like ‘Paranormal Activity’ and ‘The Ring’ and genre favorites like Del Toro, to inventive comedies like ‘The Final Girls’ and ‘Scouts Guide to the Apocalypse,'” Fandango managing editor Erik Davis told TheWrap. “So there’s quality and variety.”

While there may be variety, the sheer volume of creepy films hitting theaters in the coming weeks could potentially create a glut.

“All the films create some extra pressure, but at the end of the day, the public will be heard and the movies that most appeal will work, and some of the others won’t,” BoxOffice.com senior analyst Phil Contrino told TheWrap.

Among the titles generating buzz, “The Visit,” produced by Blum and directed by Shyamalan. It will get the pulse-quickening party started when it opens nationwide Friday for Universal. The film follows two kids (Olivia DeJonge and Ed Oxenbould) left in the care of their mother’s long-estranged parents (Deanna Dunagan and Peter McRobbie) who discover something creepy happens with Grandma and Grandpa after 9:30 at night. In real life, it’s the story of a director trying to resurrect a nearly comatose career.

Blum’s “Paranormal Activity: The Ghost Dimension,” the final entry in Paramount’s hugely lucrative but aging found-footage franchise, arrives on Oct. 23. It will provide answers to questions posed by the previous five films according to Blum, who produced with Oren Peli. 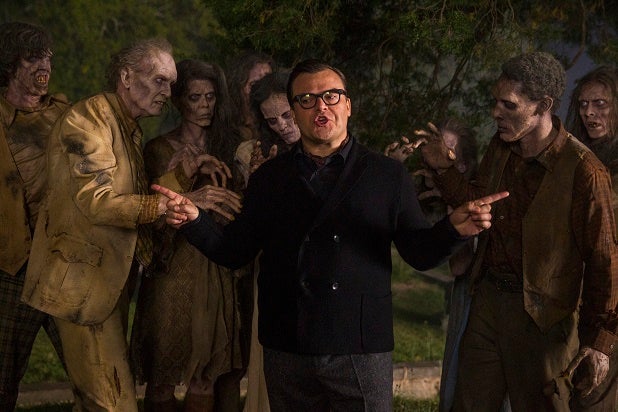 Sony would love to see “Goosebumps,” a comedy based on the R.L. Stine horror compilation that stars Jack Black, turn into a franchise, and a good start on Oct. 16 would help. There’s some scary competition though. That’s the same date that Universal rolls out Del Toro’s star-studded “Crimson Peak” and Steven Spielberg‘s spy thriller “Bridge of Spies.”

“The idea of a family-angled Halloween franchise is a good one, and Neal Moritz certainly knows how to launch a series,” Contrino said about “Goosebumps.” The film’s producer was also behind the “Fast and Furious,” “21 Jump Street” and “I Know What You Did Last Summer” franchises.

Also seeking nervous laughs is “The Final Girls,” Todd Strauss-Schulson’s homage to 1980s slasher films, that has been a hit on the festival circuit. It’s at 100 percent positive on Rotten Tomatoes and will begin a limited theatrical run and be available on VOD on Oct. 9 via Stage 56 Films and Vertical Entertainment.

Eli Roth‘s “The Green Inferno,” in which students traveling to the Amazon fall into the hands of cannibalistic natives, arrives on Sept. 25. The creator of the “Hostel” movies directs and co-wrote with Bolivia’s Guillermo Amoedo. 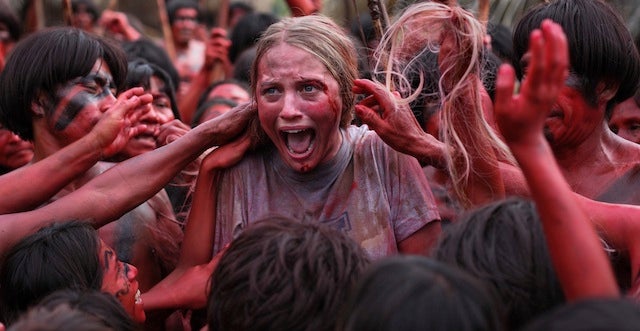 “Rings” is the third film in the series based on the Japanese horror trilogy “Ringu,” and will be the first offered in 3D when it rolls out on Nov. 13. The psychological thriller was scripted by David Loucka, Jacob Aaron Estes and Akiva Goldsman, and directed by Javier Gutierrez. Matilda Lutz, Alex Roe and Johnny Galecki star.

Another high-profile creeper will be “Victor Frankenstein,” set for release on Nov. 25 by Fox. It’s an update on Mary Shelley‘s classic directed by Paul McGuigan and written by Max Landis that stars James McAvoy and “Harry Potter” star Daniel Radcliffe.

Even the holiday season offers a chiller, the horror comedy “Krampus” from Universal. It tells the tale of a demon beast who is the opposite of Santa Clause in German Christian folklore, punishing people for their misdeeds. Written and directed by Michael Dougherty (“Trick ‘r Treat”), it arrives on Dec. 4.

Only time will tell which, if any, of these films will become a monster hit.