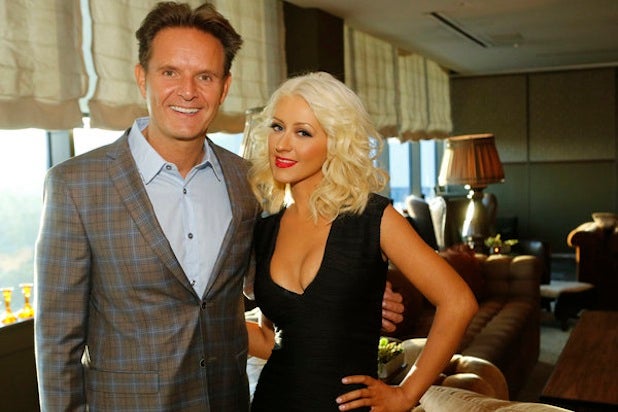 After taking a season off from NBC’s “The Voice,” Christina Aguilera has returned with a svelte new look and happy outlook on the show.

“We all have been doing our different things in our own different spaces creatively, but then to come together, I was just looking forward to coming back, to have a laugh with the boys and have fun with the show,” Aguilera told reporters over dinner with the pop star and executive producer Mark Burnett earlier this week at Soho House in Los Angeles.

Aguilera returns after taking a season off in which she promoted and toured in support of her latest album, “Lotus.” But, it also sounds as if she needed the break to do some evaluation of what she wanted in her life and career, especially as NBC decided to air two seasons of “The Voice” each year.

See video: ‘The Voice’ Coaches Get Back in Tune on ‘Reunited’

“I need to find that honest connection of intention of why I’m doing something,” she said. “As an artist, it’s just important. I don’t sit well with myself if I’m not sort of honest. And so I knew I would run into doing two [seasons] here, and I’m like, ‘Oh, no, bring on Shakira!'”

The Latin pop star came in for Season 4 along with Usher (who replaced Cee Lo Green, also returning this season). The staffing changes on the coaches’ panel were a possibly perilous shift in a winning formula, especially as “The Voice” was returning from a highly rated and Emmy-nominated season.

“It’s like a risk for me taking real superstars and making sure everybody in the red chair could tour whenever they want, whatever — they don’t need this for a job,” Burnett, 53, explained about using coaches who are also current artists.

The risk paid off. “The Voice” found that the audience readily accepted Shakira and Usher on the show and ratings stayed level with previous seasons. As a result, the show has augmented its coaching staff to a stable of six artists who could rotate in and out each season. It has already been announced that Shakira and Usher will return for Season 6.

“And wasn’t it the first time ever you’ve seen a show where there wasn’t a big unnecessarily crazy drama about judges fired, new judge comes in?” Burnett pointed out in an apparent reference to the almost yearly media frenzy over replacing coaches at Fox’s “American Idol” and “The X Factor.”

“It’s, like, please, it’s like the complete opposite of what ‘The Voice’ stands for,” he added. “It was great. They went, ‘Hey, come on in. Take a chair. You know, we’re all a family here.” And it really worked and the audience gets this.”

Appearing refreshed and almost Zen-like about the competition after her break, Aguilera revealed her early strategy for building a team that might finally bring her a first win on the show.

“I definitely realized a sales pitch is everything at first,” Aguilera, 32, explained. “I realized actually, it’s interesting. It goes through stages of what’s kind of important. At first it’s like, OK, I’ve got to sharpen my speech … [Blake Shelton’s] witty … [Adam Levine‘s] deliciously competitive, you just see his blood boiling because he’s the best sales pitch. I mean, he’s a genius sales pitch guy … You’ve got Cee Lo, who’s just his own unique being. And sometimes the things that come out of his mouth is just so poetic and so interesting and articulate.”

But, Aguilera made sure to point out that strategy doesn’t trump the fact that they’re dealing with “people’s feelings.”

“You’re constantly checking how your delivery with them is … That can be a really tricky place to be,” she added. “So, we’re sensitive to that in going in. And we always bring it back to that.”