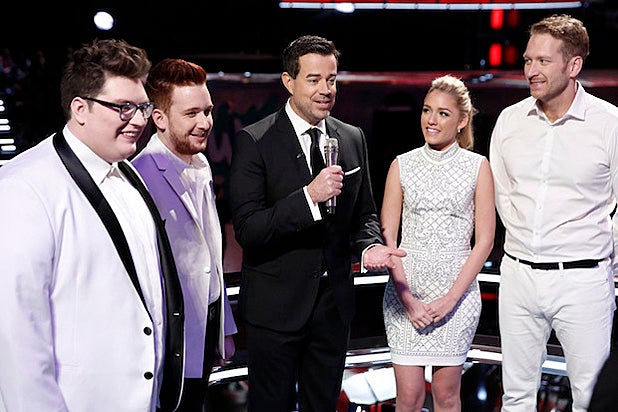 (Spoiler alert: Please do not read on if you haven’t watched Tuesday’s finale of “The Voice.”)

It came down to the wire on Tuesday night as the final four fought to be crowned the winner of “The Voice” Season 9.

Jordan Smith, Emily Ann Roberts, Jeffery Austin and Barrett Baber made it to the last leg of the NBC singing competition, but in the end, there could be only one.

And that was Jordan Smith, from Team Adam.

Before the winner was announced, the last show brought back some favorite contestants from throughout the season, with the finalists getting to team up with their old friends again such as Zach Seabaugh and Madi Davis.

During the two-hour mega-show, the top 24 were also reunited for a group performance of “Lean On.”

The contestants got a helping hand from some serious star power to close out the season, as Coldplay performed their new single “Adventure of a Lifetime” surrounded by their gorilla dancers.

Pop sensation Justin Bieber delivered the final performance of the night with his new single “Sorry,” before snapping some selfies with fans.

Smith then had the last chance to sing, belting out “Climb Every Mountain” to make crowd go wild in celebration.

See video of Smith’s performance below.