“If you have a product you want to sell, a spot in ‘The Walking Dead’ sells stuff,” he said, dumbing down his language for those listening in.

When you have the biggest show on cable, you can court advertisers as simply as that, apparently. Sapan’s comment was perfectly timed to the ongoing TV upfronts, when content providers compete for big commercial bucks through mid May.

Sapan also isn’t concerned with down traditional Nielsen numbers for the zombie apocalypse series. After all, the reach of “The Walking Dead” is still huge, and the original series has already launched a useful after-show and successful spinoff, “Fear the Walking Dead.”

Plus, he’s not concerned about 2016, 2017 or even 2018, individually, right now. AMC approaches this particular franchise in five-year chunks, Sapan stated.

“Our horizon for ‘The Walking Dead’ is very long,” the top executive briefed those who measure current and future earnings.

Earlier this morning, AMC Networks revealed strong earnings per share and revenue for the fiscal year’s first quarter, mostly thanks to digital distribution and affiliate fees. There was also some debt refinancing that gave the company a nice, fat adjustment — right where and when it needed one.

Wall Street liked what it saw, as AMCX stock is currently trading up almost $4 per share, or around 6 percent. Here’s the five-day stock movement, which best shows the shares’ big jump in pre-market trading today: 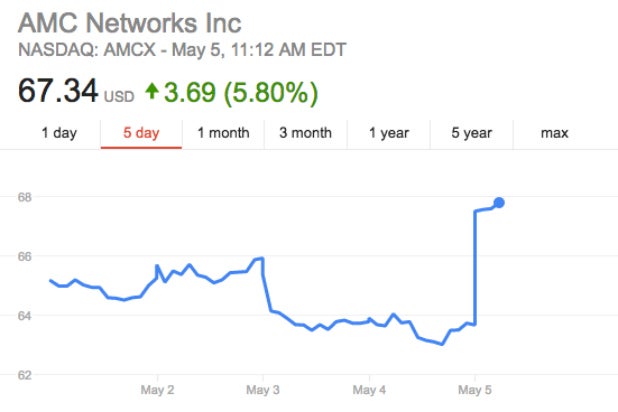