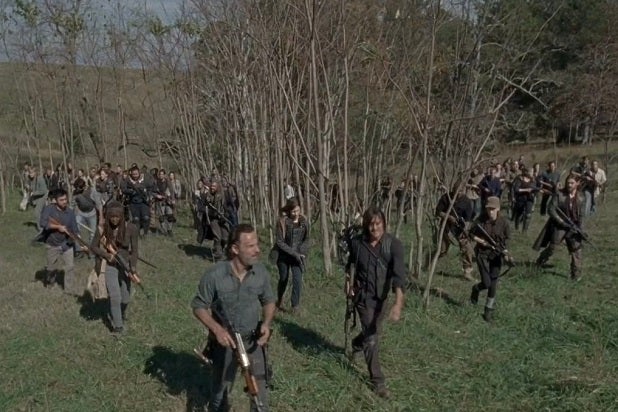 (Note: This post contains spoilers for the Season 8 finale of “The Walking Dead.”)

The “All-Out War” has come to an end on “The Walking Dead,” with a final showdown between Negan (Jeffrey Dean Morgan) and Rick (Andrew Lincoln) that had a couple of twists.

Spoiler alert: Rick and his crew survived the battle with the Saviors and ultimately came out victorious. Rick didn’t kill Negan, though. Instead, he told Negan he would be a prisoner as a testament to the fact that peace would be the new norm.

But it almost didn’t go Rick’s way. If it hadn’t been for the intervention of Eugene (Josh McDermitt) sabotaging Negan’s bullets, Rick and everyone else probably would have died. That’s because Negan executed a genius trap to get Rick just where he wanted him.

What exactly was Negan’s plan, though? At one point, it seemed like Rick had figured it out. So how did he and his crew still fall into Negan’s clutches?

It was a testament to the fact that Negan is a brilliant tactician that Rick fell for his elaborate ruse. First, Negan planted phony intelligence about his plans with Dwight (Austin Amelio) in the season’s penultimate episode. After Negan figured out that Dwight was a double agent working for Rick, he used that connection to give Dwight a fake plan for an attack on the Hilltop. Negan laid out a plan in which he and several groups of Saviors would surround the Hilltop and open fire from sniper positions.

That plan, and the map that laid it out, was a trick. But Negan knew that Rick wouldn’t completely trust what Dwight gave him. Negan explained the rest of the plan to Gabriel (Seth Gilliam) on the drive out to the ambush location: He sent Saviors out to a road block, intending for Rick to find and eliminate them.

The Saviors at the road block were the second, especially brilliant part of Negan’s plan. He knew that Rick finding Saviors and taking them out would raise his confidence that he got the drop on Negan. He didn’t know that Negan was purposely sacrificing those soldiers. And on one of the Saviors at the road block, Rick found another map. That made Rick believe the first map from Dwight was a trap, and the second map was Negan’s true plan.

Meanwhile, Negan sent a second group to attack the Hilltop while Rick and his crew thought they were about to take down Negan. Luckily for the Hilltop, that attack failed, too — because Negan didn’t anticipate that the Savior prisoners there would band together to fight with the Hilltop. They helped beat the Saviors and save the settlement.

Negan’s plan was sound, but he couldn’t anticipate betrayal.