(Warning: This post contains spoilers for the Season 1 finale of BBC America’s “The Watch.”)

The first season of BBC America’s “The Watch” ended on a huge cliffhanger on Sunday when Captain Sam Vimes (Richard Dormer) is teleported into the Observers’ realm. That’s after Wonse (Bianca Simone Mannie) teams up with them, having turned on The Watch after history is rewritten to make everyone believe she’s the one who committed Carcer’s (Sam Adewunmi) crimes — including the summoning of the Noble Dragon.

The series, which is inspired by Terry Pratchett’s “Discworld” fantasy novels, has yet to be picked up for a second season. But if and when it does, Adam Hugill, who plays The Watch member Constable Carrot, said the twist at the end of Season 1 “changes everything” moving forward.

“Who knows what could happen, really? Because the whole point of the Observers’ realm and the people that Vimes has been transported into, they could choose any multiverse they want and they could throw him back into a multiverse where he would have to exist as well,” Hugill told TheWrap. “So God knows where you might end up finding him in a potential further-down-the-line story. Who knows where they throw him back into.”

Hugill said it’s “pretty crazy” that Vimes, Carrot, Corporal Angua (Marama Corlett), Corporal Cheery (Jo Eaton-Kent), Lady Sybil (Lara Rossi) and everyone else have had their memories wiped of Carcer and now believe Wonse is the one responsible for the havoc wreaked in Season 1. They even think she’s the one who called the Noble Dragon instead of helping The Watch and Goodboy tame the beast in the Season 1 finale. 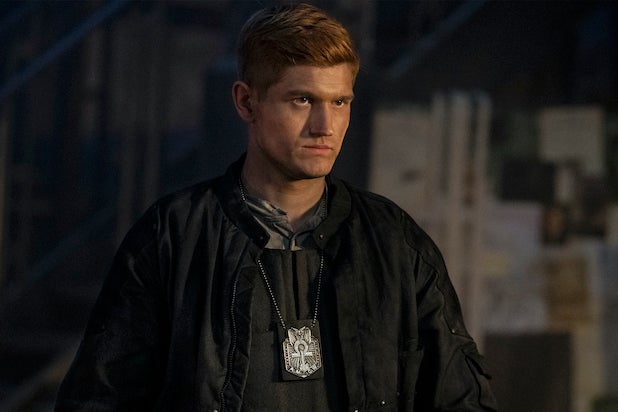 “The fact that we would have no idea about anything, not in the same way, that’s happened in the past seven episodes… it’s all suddenly changed,” Hugill said. “It’s a bit like what they’re doing in ‘WandaVision’ and Marvel at the moment, where the multiverse has opened up and they can go in any which direction because it split straight through the middle. It’s similar here, with the Observers’ realm, that they can pick and choose and take away anyone they want at any time, like they took Vimes away at the end of the season. So yeah, anything could be happening and it feels like we’re the puppets in the scenario of the series. And Carrot has no idea that Carcer existed; neither does Vimes. And these are all such integral parts of Vimes’ life and part of mine because it was a turning point for us all to start fighting time again. So it changes everything, really.”

Now let’s turn our attention to all the Angua-Carrot shippers who were hoping to see the pair’s friendship take a step in the romantic direction on Sunday. You were probably a little disappointed to see the furthest they got was when Angua overheard Carrot telling the magical mirror in The Watch House, “Angua, I think you’re cool.”

Well, Hugill said you can blame the coronavirus for cutting out a scene that would have moved things further along.

“There was an alternate scene that had been filmed because of COVID, which is a shame, because it did sort of tie into the whole Angua hearing and speaking to the mirror and Carrot confessing some feelings toward her,” he said. “I don’t know whether it’s purely based in all romance. I think it’s very much a caring, a strong sort of sense of protection towards her, because over the course of the series, they’ve very much looked to one another and found a kinship, I guess. Especially how far they’ve come from the beginning of the series.”

He continued: “They started off sort of butting heads with each other and then, as the series progressed, they realized that they’re weirdly one in the same. They have the same views and they have the same journey they actually want to go on — they just go about it in different ways. So they’ve ended up becoming really close and sharing vulnerable sides to themselves. And sadly, the scene that we didn’t get to film was Angua basically hinting to Carrot face-to-face that she heard him and he sort of left like, ‘Oh my God, did she hear me? Oh, crap. I don’t know.’ But sadly, we didn’t get to film that because COVID hit and then we had to do rewrites and film the bare necessities during COVID times. So sadly that hit the cutting room floor without even being filmed.”