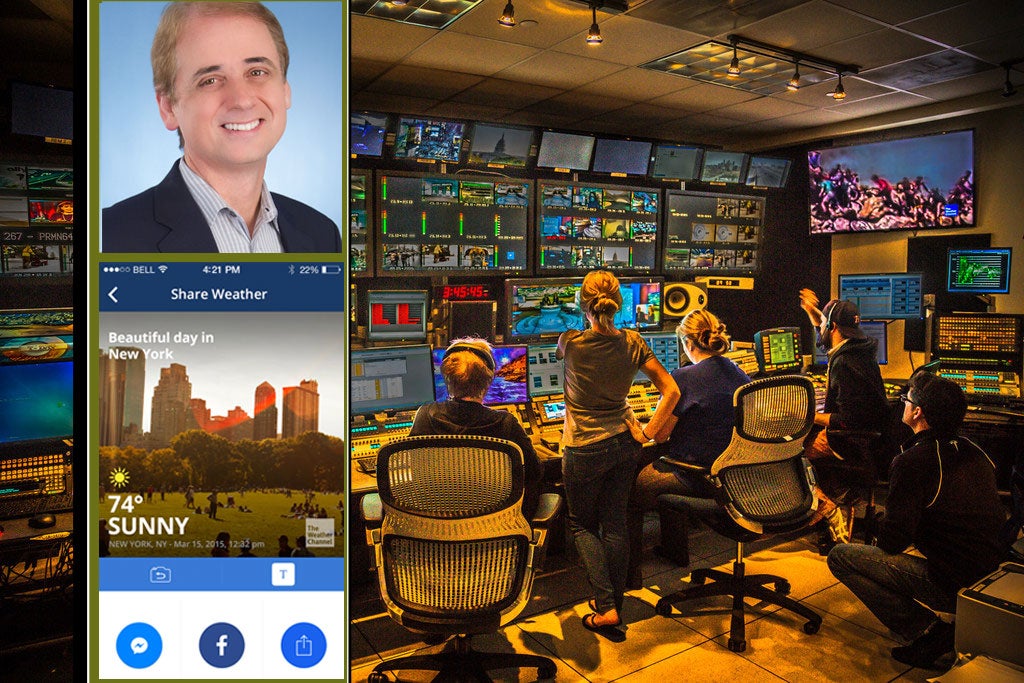 When a deadly tornado system ripped through northern Illinois on Thursday April 9, the hurricane specialists at The Weather Channel’s Atlanta headquarters sprung into action and eyewitnesses at the center of the storm provided key footage — from dash-cam video, to devastating images captured on Twitter’s new live-streaming app Periscope.

For The Weather Company’s CEO David Kenny, it was a prime example of TV’s marriage with mobile: “It’s stunning to me when you can have the mobile interaction, giving people on the ground a voice on television.”

Nearly three and a half years into his tenure as CEO, Kenny has transformed what was primarily a TV operation into a mobile powerhouse.

“When I came, it was about a core business — a very successful cable channel with very unique technology,” Kenny said in an interview with me. “Television was at least two-thirds of our business, with digital being roughly one-third. Now, it has flipped.” That flip is often overshadowed by the company’s headline-grabbing disputes with pay-TV distributors. But, as Kenny put it, “We believe there is no future if you’re not winning on the tech and media side.”

The Weather Company, owned by a group that includes Comcast’s NBCUniversal and private equity firms The Blackstone Group and Bain Capital, hired Kenny in January 2012. A former Yahoo board member, Kenny previously served as president of Akamai Technologies and, before that, as CEO of digital marketing firm Digitas.

“Three years ago, it was a much different mindset at some cable networks than what it is now. Today, you have to have a digital strategy in place,” said Brad Adgate, VP of Research at Horizon Media, a media services firm. At the time of Kenny’s hiring, a press release stated he’d been brought in to “leverage the company’s unique collection of media assets.” Since then, the company’s name has been changed from The Weather Channel Companies” to “The Weather Company.”

“Four years ago, my question was where would the business be in a decade,” Kenny said. “It was pretty clear to me that connected devices would really change the way businesses interacted with the weather.”

It started with mapping the atmosphere…

The Weather Company’s mobile-first focus is driven by data.

“We really decided to offer the weather to every person on Earth,” Kenny said. “We set out to map the atmosphere the way Google mapped the Earth.”

Doing so required a shift from an historical mainframe computer model to the cloud. The company can now provide updates on what’s happening every place in the atmosphere every 15 minutes. “On an average day, we do 11 billion individual forecasts,” Kenny said. “On a peak day, we’ll do 26 billion.”

Those massive numbers are driven in part by Apple, which last year chose to make The Weather Company its default weather data provider on iOS devices. Google is also one of the company’s key partners. “The power of working with Apple and Google made it global overnight.”

In February, The Weather Company ranked as one of the top mobile properties in the United States. According to ComScore, it reached more monthly unique visitors than Twitter, Pandora and ESPN. Kenny said that helps the company stay connected with its audience until big weather events hit: “People get their day-to-day weather from a mobile device, but when the weather gets more serious, the mobile device draws them towards television.”

The Weather Company is leveraging its technology by licensing it to other companies, through its business-to-business unit. The company’s real-time data can better measure things like turbulence, so pilots can pick ideal flying routes and altitudes, and, Kenny said, the data is used by 130 airlines flying 50,000 flights a day.

“We’ve reduced turbulence for our carriers by more than 50 percent in the past three years,” he said. Retailers use the data to determine how weather affects everything from sales of snow shovels to air conditioners and mosquito repellent. And packaged food companies can better predict when products should be put on sale, due to weather-related wild cards like humidity.”

Kenny said a new partnership with IBM will fast-track licensing: “We’re three years ahead of what we predicted (for this business), and IBM is a huge part of that.”

Recent stories about The Weather Channel have zeroed in on its disputes with pay-TV distributors. In March, Verizon said its contract to carry The Weather Channel on its FiOS TV service (5.6 million customers) had expired and had not been renewed. Instead, it teamed up with rival AccuWeather, which launched its own 24/7 network.

Kenny noted that The Weather Company has been renewing deals, which of late have included new contracts with distributors like Time Warner Cable and Cox Communications.

Last year, we renewed about 65 percent of our total subscribers. And some of them were very long-term deals,” he said.

Kenny acknowledged that in some negotiations “we need to do a better job of understanding the other side’s story.” But given his belief that TV experiences should combine the best of mobile and TV, Kenny said he likes working with distributors who are “more forward-thinking.” He pointed to the company’s mobile partnerships and said, “We have great relationships with Apple and Google because our strategies are aligned.”

Kenny also sees differences between The Weather Channel and other programmers who are negotiating new distribution deals with cable providers.

There is one big, obvious reason, Kenny noted: “Nobody else also has a direct digital relationship with half of America every day. We think differently because we can connect differently.”