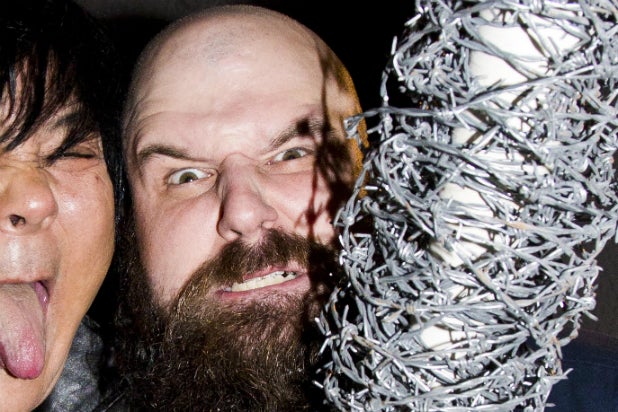 Should Viceland docuseries “The Wrestlers” get a second season, host Damian Abraham would “absolutely” like to do an episode on All Elite Wrestling (AEW).

“I think AEW is a fascinating thing to watch emerge on the wrestling landscape,” Abraham told TheWrap, naming Kenny Omega as a “key” professional wrestler who he didn’t get to meet and work with on Season 1.

In our interview, Abraham referred to the AEW-led shift towards wrestlers being more in control over their own careers as “punk rock.” And he should know: Abraham’s other gig in entertainment is as the frontman for Canadian hardcore punk band F—ed Up.

Abraham pointed to All Elite wrestler Joey Janela as a prime example of the power shifting from a handful of bookers to a locker room full of talent.

“That guy made himself one of the biggest stars in independent wrestling just through viral YouTube clips and throwing great parties,” Abraham said.

Yes, times are a-changin’ in the world of pro wrestling, which is probably not music to WWE chairman Vince McMahon’s ears — or his shareholders.

Speaking of the granddaddy of the industry — and the literal granddaddy McMahon — we asked Abraham if he sought access to World Wrestling Entertainment for Season 1 of his show, which in addition to U.S.-based episodes, also visits Japan, Mexico, Africa and Canada, chronicling very different forms of professional wrestling around the globe.

“I knew it was gonna be a moot point trying to get that access, so I purposely avoided it. I didn’t think it ever needed to be brought up,” Abraham said.

“I liken it to — there’s nothing wrong with the food at this place, but to make this analogy, our perception of wrestling has been shaped by the McDonald’s of pro wrestling,” he added. “[WWE] is the most successful brand, and it definitely has the greatest market penetration, but it is offering you one very distinct version of food — or in this case, wrestling.”

Also Read: 'Dark Side of the Ring' Producer Says They Got 'So Lucky' Finding Body Doubles for Wrestler Reenactments

“I think we mentioned them by name once in the entire series,” he said.

“The Wrestlers” continues tonight at 10 p.m. on Viceland with “Japan’s Finest Wrestlers,” which focuses on the upcoming generation of female wrestlers in Tokyo.