Indiegogo co-founder Danae Ringelmann doesn’t think it will be long until every studio in town is taking advantage of the crowdfunding model not just to raise an audience, but also to raise money, for their their own blockbuster ambitions.

“Its not that far away, actually,” Ringelmann said at TheWrap’s Media Leadership Conference, TheGrill, Tuesday at the Montage Hotel in Beverly Hills. “What we are going to see is studios recognizing the value of unleashing a fan base early before the film comes out, as a tactic to actually identify social influencers online.”

“The way they will dabble in this,” she said,” is carve out a chunk of the budget to engage fans, and invite them into moviemaking process so they then become the biggest evangelizers of the movie.”

Zach Braff Taught Crowdfunding to Woody Allen – and He Liked It

Ringelmann was part of the panel, “Crowdfunding and the Movies: The New Model,” which also included Milana Rabkin, digital media agent at UTA; and Michael Shamberg and Stacey Sher, producers of Zach Braff‘s Kickstarter-funded project “Wish I Were Here” The panel was moderated by TheWrap’s editor-in-chief, Sharon Waxman.

For her part, Ringelmann stressed that crowdfunding is not just about raising money but about raising a community of supporters who crave the opportunity to be involved in the film from start to finish.

The process, she said, benefits entrepreneurs and established businesses alike, because it serves as an excellent marketing tool that not only gauges interest in the product but advertises it, too. 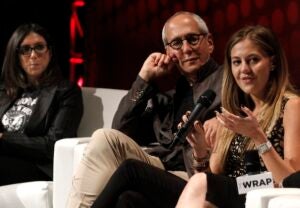 “Crowdfunding has become an incredible market-testing platform When people vote with their dollar, they’re not just saying, ‘Yeah I like it. I would buy it.’ They’re saying, “I am going to buy that. When projects go on to raise only $100 out of $1 million, that’s a great success, too, because they learn no one wants it.”

(At right, Sher, Shamberg and Rabkin)

Shamberg not only agreed but added that Ringelmann’s prediction is already coming true, with at least one studio having already hopped on the crowdfunding bandwagon.

“Warner’s is the recipient of all of the Kickstarter money for ‘Veronica Mars,'” Shamberg said.

Rabkin pointed to “Veronica Mars” creator Rob Thomas, who set a crowdfunding record last spring when he raised more than $5 million on Kickstarter to adapt his cult CW show for the big screen. The agent who helped Thomas choose the platform, Rabkin revealed that the unconventional fundraising strategy had been brewing in Thomas’ head for nearly three years.

“Rob has been so set and passionate about making a ‘Veronica Mars’ movie for a long time,” Rabkin said. “He heard of Kickstarter and Indiegogo on his own and came to us to explore the differences between the two.”

Warner’s greenlit the project roughly 24 hours after the campaign launched and had amassed $2.7 million in pledges from 45,665 donors. While the film’s budget came entirely from passionate fans, Warner’s Digital Distribution is planning on paying for distribution and marketing costs.

The news created a stir of mixed emotions at the time. Some praised Thomas for finding a way to make a film that none of Hollywood’s corporate entities would finance, while others criticized him for soliciting money from fans when Warner Bros. was still involved in some capacity.

When “Scrubs” star Braff launched the Kickstarter campaign for his directorial follow-up to “Garden State,” he also became the subject of intense scrutiny. Double Feature Films producers Shamberg and  Sher said that although the backlash “hurt,” it ultimately didn’t matter.

“The haters are not your backers,” Sher said.

And, Sher said, the film’s 46,520 backers could not have been more excited to fund the film in exchange for perks, which included the opportunity to be an extra or crew member on set for a day, as well as access to behind-the-scenes production videos released weekly.

“We had backers that were background artists, and they loved their day on set with us, and our crew loved getting to know people who financed our film,” she said. “It created a completely different energy on set.”

“I think that anything new is threatening to the system,” she added. “They started giving Spike Lee (who raised over $1.25 million on Kickstarter for his new, untitled project) a hard time, and by the end, everyone embraced it. Our film brought a huge amount of people who had never crowdfunded anything, and they continue to give money to the platform.”