My friend, writer/producer George Francisco, says that reading Hollyblogs reminds him of long nights in too many bars telling stories. And he’s right — that’s exactly what I assume a Hollyblog (or, for that matter, any good story) to be. For example, how could anyone chronicle the history of the postwar world without reading Dean Acheson’s “Present at the Creation,” in which the former Secretary of State laid out the plan that, eventually, brought the Soviet Union to its knees.

Let’s call this “Present at the Creation” … of modern rock ‘n’ roll.

It’s the story of almost the exact moment in the early ‘70s that, following the breakup of the Beatles the year before, the Rolling Stones, lead by lead singer Mick Jagger and his guitarist/cowriter Keith Richards, went from being the #2 English group to “the world’s greatest rock’n’roll band” (as they’re now normally called). 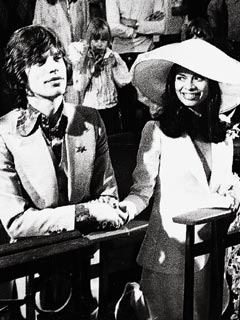