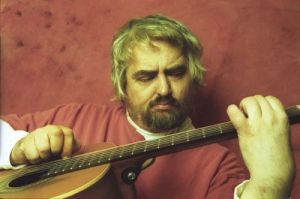 I hadn’t heard of the movie, the filmmaker or the website before today, but in a recent interview withPedestrian, "My Suicide" director David Miller mentioned an intriguing bit of news about a potential biopic of schizophrenic musician Daniel Johnston.
He is the subject of one of the best documentariesin recent memory, Jeff Feuerzeig’s "The Devil and Daniel Johnston," which won Best Director at Sundance in 2005.
Miller and his son Jordan are writing the narrative film, which "My Suicide" star Gabriel Sunday will direct and star in as young Daniel. The Millers would produce the movie should they find financing for the project. The "epic super hero story" promises to cover different territory than the documentary, which was propelled by a staggering amount of archived footage from the Johnston family’s home movies.

Asked who they have in mind to play the older (heavier) Daniel, Miller says that Johnston fans Philip Seymour Hoffman and John C. Reilly have reached out to him about the project, while Johnny Depp is also a huge fan of the singer, though the filmmakers would prefer to have him star as Daniel’s older brother, who wasn’t a major figure in the documentary. Hoffman would certainly be an interesting choice, but the mention of Depp sounds like especially wishful thinking, though you never know with passion projects like these.

Miller goes on to say he’s working on a movie with Tim Kasher, lead singer of indie rock bands Cursive and The Good Life, and co-founder of Saddle Creek Records with Conor Oberst of Bright Eyes fame.

Kasher provides a "haunting and beautiful" score for "My Suicide," which also features a kick-ass soundtrack, including original music from Devendra Banhart, Bright Eyes, MGMT and Mark Mothersbaugh, as well as previously existing tracks from My Morning Jacket, TV On The Radio, Animal Collective, The Pixies and most notably, Radiohead, who were the first band to sign on to the project.

According to Miller, Kasher has written a screenplay that he also plans to direct titled "Help Wanted Nights." Rather than mix the music for "Nights," The Good Life would provide a live soundtrack as the film tours theaters.

It strikes me as a fairly ambitious plan, so I’m not sure if any of this stuff will ever actually happen, but it sure does sound exciting. Who would YOU like to see play an older Daniel Johnston?