If you believe all the tech pundits, the future of home movie watching will be moving to "the cloud." We're already well on the way to where Netflix DVDs will no longer arrive in the mail and sit, unwatched, on an entryway table.

Soon all films and many reruns of TV shows will be downloaded and sit on your hard drive — indeed, this option is already available in many cases.

It all sounds great — if you know just what you want to watch — and if what you want actually is available. But the truth is, sometimes I still need a movie maniac, a real person who will steer me to some incredibly wonderful foreign classic or who owns that obscure title I've been searching for.

Sometimes, too, I am itching to experience the joy of discovery that comes from browsing real-life shelves at some real-life repository with a highly eccentric collection – and not just computer-generated "recommendations." For that I can't go to the cloud; I need to go to a great video store. 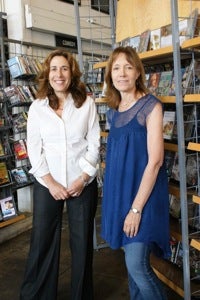 I am referring, of course, not to the usual chain video store (Blockbuster being the most ubiquitous), whose offerings have become more and more limited. I mean those idiosyncratic old-time video stores, like Eddie Brandt's Saturday Matinee in North Hollywood, or CineFile in West L.A., or my local in Santa Monica, Vidiots.

All of these stores are suffering this summer, hit hard not only by the downturn in the economy but also by the DVD-by-mail services. So let me sound a note of warning – they will disappear if we don't support them – and once gone, they will surely be missed (like our vanishing independent bookstores, such as the late-and-lamented Dutton's).

Vidiots has been in business on Pico Boulevard since 1985, located a stone's throw from the Santa Monica bowling lanes and across from the Civic Auditorium. Recently, I dropped by for a chat.

Vidiots' owners, Cathy Tauber and Patty Polinger, both in their 50s, first met at age 3 at the Children's World Nursery School on Robertson.

They remained friends over the years, and in the early 1980s, they realized that although both liked their jobs — Tauber was working for Frank Zappa, and Polinger was working in international film distribution at MGM — neither of them was fully satisfied.

"We'd had it. We didn't want to find another job," Tauber said. What they wanted was to start their own business.

They considered several options, but then they read an article in Esquire about "these wacky video stores."

The time seemed ripe for a Westside specialty store that would stock videos of the movies they themselves would want to see: independent, foreign and art films. Jerry Harvey's Z Channel already had introduced a lot of Angelenos to foreign films.

There were a few revival theaters operating, including the Fox Theater in Venice, and a few specialty video stores had opened, such as Videotheque on Westwood Boulevard — but Santa Monica needed its own neighborhood outpost.

There was another motive, too.

Both women were single at the time, and they hoped that if they created just the right kind of store, it might bring in the kind of guys they would want to date.

They leased a space on Pico in 1985 (about half the footage they have today). Initially, they hired a consultant who had been mentioned in that original Esquire article, to help them start their collection.

They began with 800 titles (today they have more than 40,000 in stock). They eventually hired a film broker to find hard-to-get releases.

"We would go to these warehouses in the valley and pick among the videos," Polinger recalled.

Among the most sought after then were The Beatles' "Let it Be" and Chet Baker's "Let's Get Lost." Among the most successful foreign film rentals early on was the Brazilian classic "Black Orpheus."

Just a couple of weeks after they opened, Vidiots was written up in the LA Weekly – and that launched them, along with an event they staged with Kenneth Anger (of "Hollywood Babylon" fame).

Just a year and a half after opening, they expanded, but they never expected it to go on like that forever. They had always been warned it was a "five-year business."

"It always felt temporary," Tauber said. "We never thought we would be here 24 years later."

It's been a good run, though: "It was fun to be out there…. The customers really educated us."

And the customers turned out readily for events, including ones with film notables Anjelica Huston, Michael Apted, Callie Khouri, Russ Meyer (who signed women's bras at the event), critic Kenneth Turan and the indie director Henry Jaglom, who has a large, loyal local following.

There have also been spoken-word events with film figures such as Viggo Mortensen, and music-scene personalities like Exene Cervenka of X and John Densmore of The Doors.

Over time, different genres and titles have risen then waned, from classic foreign films, to B-movies and cult films, to Hong Kong martial arts films, to anime, films by Lars von Trier and the Dogme 95 Collective, and foreign horror films.

"The store has changed with us," both owners said, acknowledging that their offerings often reflect the evolution of their own tastes. Currently, they have found themselves increasingly interested in documentaries, so that portion of Vidiots' collection has expanded accordingly.

The store's passionate video clerks have also played a great role in Vidiots' history, and have included stand-up comedians, writers and such now-notable cultural figures as Jason Bentley, KCRW's music director and the host of the station's "Morning Becomes Eclectic."

And although Tauber and Polinger did not meet their respective husbands through the store, Vidiots can take credit for many other romances, not only among customers, but also the staff, some of whom have gone on to marry and have children (sometimes even in that order).

Over the years, Vidiots survived the wave of mom-and-pop video stores that seemed to open on every corner, as well as the rise of the video superstores, such as Blockbuster.

Looking back, Polinger thinks that because the offerings at Blockbuster were so mainstream, people turned to Vidiots from all over the city to find titles no longer carried elsewhere. And that's a trend that has only become more pronounced today.

"Kids who are doing musical theater have to come here to find the musicals they are looking for," Polinger said.

Price wars between Blockbuster and Hollywood Video left those companies highly in debt – and devalued the cost of rental to the average consumer.

Tauber said that she can sometimes buy a DVD on its day of release at Best Buy for $3 less than it's being offered by her wholesaler (Best Buy does this promotion as a loss leader) — but what that reveals about the profit margin, or lack thereof, for small video stores is bad news.

Vidiots has had to evolve its own rental policies with the times, which include membership plans (for complete details of Vidiots' rental policies, visit vidiots.com).

Business is also suffering from the contraction in the entertainment business here. Much of the shop's bread-and-butter came from production companies doing research. ABC casting had been one of their best clients, but this year they haven't been around much.

Lately, Tauber and Polinger have noticed the store is becoming more of a neighborhood place — with traffic worsening and gas prices somewhat higher, people seem to want to drive less. And the events still can be a draw — a notable recent example being an evening with Oliver Stone.

But more than anything, the store is the sort of place you want to visit and hang out in. Walking around the store is intoxicating, and the racks of silent films, musicals, foreign films from all over the globe, TV programs, cult films and row upon row of documentaries remind one of the diversity of creativity in film rarely on display today — on TV, in movie theaters, at the studios or, for that matter, in that approaching cloud.