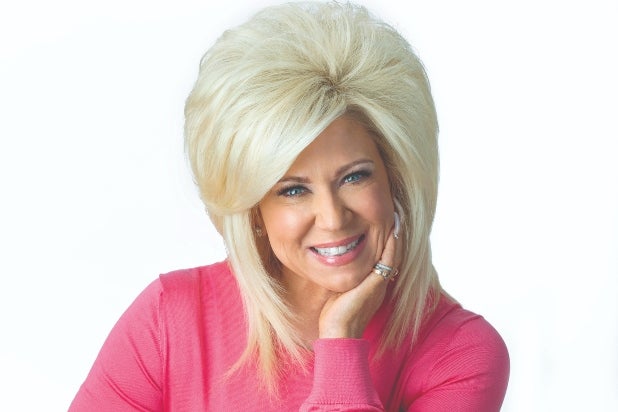 Theresa Caputo has had to film her TLC reality show “Long Island Medium” virtually since the pandemic broke out, but that hasn’t stopped her from giving strangers spontaneous messages from their departed loved ones as she’s going about her day — even if she has to do from six feet away and through a mask.

“My rule always with Spirit is if they push me enough to deliver messages,” Caputo told TheWrap ahead of the launch of her new podcast from Acast called “Hey Spirit!” out now on Spotify and Apple Podcasts.

Caputo said Spirit did just that as she was finishing up a doctor’s appointment back in July when she met a woman in the office and was immediately compelled to give her a message from her late mother and husband. The reality star uses “Spirit” to refer to departed souls communicating with her from the other side.

“We had masks on, and you know, mask or no mask, Spirit can still communicate,” she said. “It happened to me a couple of weeks ago in the doctor’s office. I wasn’t filming or anything, I was just in there getting routine blood work. The office had changed over staff and I didn’t know anybody in the office, and I come out of the examining room and I started talking to this one girl about bracelets. All of a sudden, this other woman walked up, and her mother and her husband came through.”

Despite social-distancing and mask-wearing, Caputo said she has no problem using her gift to connect people with their deceased friends and family.

“Spirit will place the people in my path who need to hear from them, who need a healing message,” she said. “Maybe they just need words of hope or faith.”

Now, instead of doing readings out of her Long Island home like she usually does on her TLC show, she’s conducting sessions with clients over Zoom and using the audio for her podcast, “Hey Spirit.”

She hopes the new medium will give fans the ability to connect with her gift in a new way.

“I always say, Spirit takes us on this emotional roller coaster of being able to feel the pain, the sorrow, the loss, and the grief — and then in the next moment, they have me say something or do something to give [their loved ones] the ability to laugh or smile,” Caputo said. “To be able to feel that, I think it’s going to be so powerful.”

Episode 1 of “Hey Spirit,” called “Desiree Reconnects With Her Son, on His Birthday,” is now streaming on Spotify and Apple Podcasts.