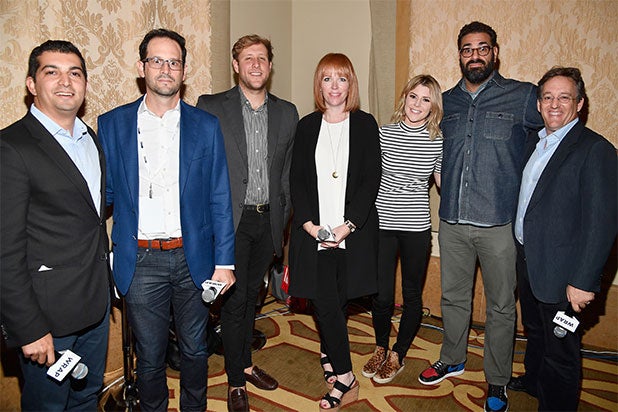 It turns out, innovators that shake up the way content is consumed and distributed in Hollywood look up to their own innovators, too.

“I’m a little bias, but I think Crunchyroll is an amazing company,” Billy Parks, EVP of creative content and strategy at Otter Media, said of his pick for innovator, which streams anime videos, legally. “Passionate fan base, passionate group of people, over a million paying subscribers to bring paying content. There are a lot of people who watch that content.”

Karyn Spencer, the VP of Creator Lab at AT&T, said that Chance the Rapper is inspiring to her because he never “ceases to amaze me with everything he’s involved in from leadership perspective to charitable perspective,” and that he’s delivering a “positive, uplifting message in a space that typically” thrives of negative messages.

Emiliano Calemzuk, former president of Fox Television Studios and who formed digital platform Raze with Sofia Vergara and Luis Balaguer, had a different approach to naming his innovator.

“I admire people who take chances on a person, and take a risk even if they aren’t the traditional choice,” he said. He further explained that he had zero idea how to run a studio when Peter Chernin asked him to run Fox TV, but he was told to “go and do it anyway.”

Altmann is inspired by a category — how people are tapping into content in Asia, finding talent there, and doing “weird stuff” that turns out to be successful when no one thought it would be. He’s also really impressed with podcasting and believes that it is the equivalent or as important as looking at books for content.

Maxam wants to meet Frank Gehry one day because he “sees space so differently,” and had one piece of advice for members of the audience: “If someone wants to be your mentor, let them.”

Massoudi, who truly believes that by 2020, the largest TV network will be a free, video on demand subscription service, believes Ted Turner was the one true “visionary.”