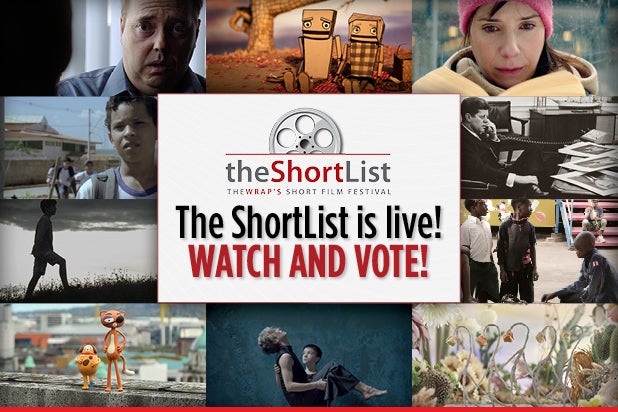 We are pleased to announce the 12 finalists for our third annual ShortList Film festival, which launches today on  http://shortlistfilmfestival.com/ and runs through August 27, 2014.

The 12 finalists include shorts prize winners from the Sundance Film Festival, SXSW, the LA Film Festival, Tribeca, Aspen, Clermont-Ferrand and other prestigious festivals. The films and filmmakers come from the United States, Mexico, Mozambique, Germany, Brazil and elsewhere around the globe.

The shorts will also air on the EPIX network August 24 at 6pm ET/3pm PT and again in EPIX’s Drive-In on August 25 12midnight ET/August 24 9pm PT.

Each winner will receive the opportunity to consult with the independent movie studio Cinedigm.

The Shortlist is proudly sponsored by Cinedigm, EPIX, MTV and YouTube.

Here are the finalists in three categories:

ME + HER Directed by: Joseph Oxford
USA, 13 Minutes
When Jack and Jill of Cardboard City are separated by Jill’s untimely death, Jack goes on a journey to mend his (literally) broken heart.
Best Animated Short, Aspen Shortfest ’14

Narrative Fiction
The Gunfighter Directed by: Eric Kissack
USA, 9 Minutes
A gunfighter in the old West starts off a chain reaction when the voiceover announcing his entrance to a saloon proceeds to give a laundry list of the town’s deepest secrets.
Audience Award, Los Angeles Film Festival ’14

My Friend Nietzsche Directed by: Fáuston da Silva
Brazil, 15 Minutes
The improbable meeting between Lucas and Nietzsche will be the beginning of a violent revolution.
Audience Award, Clermont-Ferrand IFF ’14

Off Ground Directed by: Boudewijn Koole
Germany, 13 Minutes
A dance film about a boy that says farewell to his mother.
Audience Awards, Netherlands International Film Festival ’14

The Phone Call Directed by: Matt Kirby
UK, 19 Minutes
When a shy lady (Sally Hawkins) who works in a suicide helpline call center takes a phone call from a distraught man (Jim Broadbendt), she has no idea that the encounter will change her life forever.
Best Narrative Short, Tribeca ’14

A Tropical Sunday Directed by: Fabian Ribezzo
Mozambique/Italy, 15 Minutes
It’s Sunday and crowds of eager children line up for rides at the fairground. Among them are four street kids, who have spent the week begging and scavenging. Today all they want is to feel like children again.
Best Drama, Aspen Shortsfest ’14

Verbatim Directed by: Brett Weiner
USA, 7 Minutes
A jaded lawyer wastes an afternoon trying to figure out if a dim-witted government employee has ever used a photocopier.  All the dialogue comes from an actual legal deposition.
Best Short Film, Dallas International Film Festival ’14

NOT IT (Zafo) Directed by: Pablo Orta
Mexico, 5 Minutes
An afternoon with a group of young boys who draw straws to see who will perform a grim task.
Best Short Film, Guadalajara International Film Festival ’14

The 2014 festival is programmed by Nancy Collet. Viewers can also screen the films at any time during the festival: http://shortlistfilmfestival.com and vote from August 13 – 27.

About The ShortList:
The ShortList (http://shortlistfilmfestival.com) represents the best of the best of filmmaking in the format that young filmmakers and enthusiasts use most often: shorts. The ShortList showcases 12 award-winning short films hand-picked from world’s top film festivals of the past year. An Audience Award is chosen by viewers’ online votes and a Jury Prize is chosen by the Industry jury, a six-person panel of veteran independent film professionals. Winning films will be announced at a special live event on August 28 in Los Angeles and will air on the EPIX network.