Part One: A boxer, an attorney, a single dad — all have taken their own lives in the wake of being on reality shows.

Up next, Part 2: Psychologists and former contestants discuss what some are calling the 'Truman Show Syndrome.'

And see more updates in TheWrap's investigation of reality tv:

The Consequences of Children on Reality TV

Reality Shows Under Scrutiny — Who's Accountable?

Confessions of a Reality TV Star

Aside from Paula Abdul's departure from "American Idol," it was perhaps the biggest news story of August: Ryan Alexander Jenkins, a former participant on VH1 reality series "Megan Wants a Millionaire" and "I Love Money," was found dead in a Canadian motel room amid allegations that he had earlier murdered his ex-wife in a most gruesome way.

The lurid case put the spotlight on the broader reality-television genre: How did a guy so emotionally troubled wind up on mainstream entertainment television?

Perhaps it shouldn't have been such surprise. As reality has proliferated over the last decade to become television's dominant creed, emotional stability has not always been a casting requirement.

Susan Boyle should consider herself lucky that when she was rushed to the hospital a day after the "Britain's Got Talent" finale, it was only for exhaustion.

A Wrap investigation shows that the reality of reality shows is not nearly so benign: at least 11 reality-show participants have taken their own lives — and two more who have tried to — in tragedies that appear to be linked to their experience on television shows. 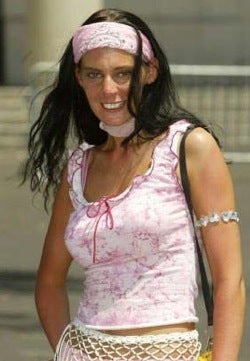 Many people may know about Paula Goodspeed (pictured left), who killed herself in front of Paula Abdul’s house last November after she was bounced from audtions on "American Idol.” Goodspeed, an obsessed fan of Abdul's, was found dead in her car in Sherman Oaks after a prescription-drug overdose.

But Goodspeed is just one among a long list of reality-show related deaths.

The victims are as varied as they are unexpected: a deputy district attorney, a single father, a young boxer — even the sister of a contestant on a makeover show prodded to make hurtful comments about her sibling's "before" look.

And the phenomenon is not limited to the United States. TheWrap's investigation found suicides and attempted suicide among contestants as far afield as India, England and Sweden.Certainly, many of these people had pre-existing problems, which may have been why they were looking for such instant TV fame in the first place. But mental-health workers have discovered that many contestants on shows like “Survivor” and “Big Brother” —  even those who win — suffer severe and often long-lasting psychological trauma. (Read Part Two tomorrow for more on this subject.)

Here are the victims, beginning with those on U.S. shows:

A Deputy District Attorney from Reno, Kosewicz, 35, killed herself after being bounced from the show. Her suicide happened just two months after Kosewicz's boyfriend, Ryan O'Neil, committed suicide himself. Kosewicz wrote on the MySpace page of fellow contestant Ness Nemir: “I’ve lost the strong Cheryl and I’m just floating around lost. This frik’n show … was such a contention between Ryan and I and plus it’s not getting good reviews … then I made the National Enquirer today so … the hits just keep on coming.” A CBS spokesman did not return calls for comment.

The 23-year-old shot himself to death just weeks before his scheduled bout on the series, which chronicles boxers trying to win a TV tournament with a first prize of $1 million. According to the police report, Turpin was sitting in a Chevy Lumina at 4 a.m. with his girlfriend, whom he had been fighting with over their 2-year old daughter. His trainer, Perry "Buster" Custus, said that "he had a lot of stuff on his mind. I was going to talk to him about it while we were driving to camp. You never really knew what was going on in Najai's head."

In joining the show, Turpin hoped to earn money to support his family, but participants were not allowed to fight in any other bouts until the live finale of the show aired. He was said to have grown frustrated when the premiere was delayed repeatedly. NBC did not return calls seeking comment.

The 26-year-old lllinois native jumped to his death from a cellular tower several weeks after he wrapped production on “Paradise Hotel 2,” which aired on News Corp's MyNetworkTV. Before filming the show, Clutter had moved to Phoenix, where he worked as a sales manager. The network initially reported that his death was the result of a climbing accident, but a police investigation concluded that it was a suicide. Clutter's uncle told police that Clutter battled depression and a bi-polar disorder and that his family had sent him money in hope of his moving back to Illinois.

TheWrap received no response to an email to a spokeswoman for the network before publication.

McGee wasn't even a contestant on the show — it was her sister, Deleese Williams, who was flown to L.A. for what producers called a "Cinderella-like transformation" that would fix her deformed jaw, droopy eyelids and crooked teeth. But the night before her plastic surgery, McGee was told she was being dumped from the show because her recovery time "wouldn't fit with the show's productions schedule," said producers.

Williams reportedly sobbed, "How can I go home as ugly as I left? I was supposed to come home pretty!"

McGee had been coaxed by show producers to say mean things about Williams’ looks — apparently with the intention of contrasting those comment with the “made-over” Williams. When Williams became aware of her sister’s hurtful remarks, family members claim, “Kelli went all to pieces” and took a fatal overdose of pills and alcohol in May.

Bell, not a contestant but a producer of the show, jumped from the Stratosphere Hotel after a day of filming. Her family says she was suffering severe depression stemming from her battle with anorexia. A news release for the fledgling show actually  promoted the fact that “Vegas Elvis” was “the second reality program in less than two months to suffer a cast member suicide,” apparently referring to the death of boxer Turpin. It claimed that Bell's death was, basically, a more exciting suicide than Turpin's.

The former “Partridge Family” child actor tried to kill himself with vodka and Vicodin after his wife asked for a divorce while the couple was filming their reality series — and just prior to the Sept. 12, 2005, airing of the first episode. The programs shows Bonaduce swilling an entire bottle of vodka and screaming at a producer, "I'll cripple him for life." VH-1 producers claim they wanted to stop filming after the off-camera suicide attempt but his wife Gretchen "really begged us to keep filming." Gretchen says she allowed the filming because "I wanted to use every leverage I had to get him help. Danny loves to be on TV." A spokesman for VH-1 did not return calls seeking comment.

The Georgetown, Kentucky, single father died of self-inflicted gunshot wounds after appearing on the series that purports to help parents deal with out-of-control young children. Terill, 37, struggling with financial and parenting issues, called the police while at the cemetery where his father was buried, threatening to shoot himself. The police stayed with him on the phone for an hour but were unable to stop him. A spokesperson for ABC did not return our calls seeking comment.

Foster lost his wife Jane, his house and his job after appearing on “Wife Swap.” Finally, he was found dead in a tiny room in Brighton, after consuming excessive quantities of methadone and alcohol. He and Jane were featured on the program because they lived "an alternative" lifestyle, each having girlfriends outside the marriage. A friend of the Foster said, “The show put an enormous strain on Simon, he was really never the same. To be shown with your wife happily seeing another woman made him a laughingstock.” Soon after filming, Jane moved in with her lesbian lover and took the couple’s two children, Foster’s boss fired him and he ended up homeless. Viewers were told in an update that the Fosters had divorced but did not link the end of the marriage to the show.

Stephenson, 17, the youngest reality suicide, took her life two weeks before her role was to air. Her body was found hanging from a tree in a Yorkshire forest two days after she went missing; it later emerged that she had been visiting suicide sites on the internet. On the sites, Stephenson was encouraged to take her own life and given advice on how to kill herself, which her mother claimed Stephenson followed in her actual attempt. "The Colony" — filmed in Australia — is described as a “fly-on-the-wall series that shows how modern day families would have coped as settlers in 1800."

O’Meara has recovered from a suicide attempt after fellow contestants accused her of being a “bully and a racist.” Her conduct towards the eventual winner, Shilpa Shetty, was questioned, and O'Meara claimed that she received death threats after leaving the show. She later described her attempt in detail, in which she downed pills and whiskey before passing out on her bathroom floor. A friend found her in time to revive her, but O'Meara still is furious with the producers for "abandoning" her. "I was in so much pain and just hurting, I couldn't believe what I'd become and how I'd been shown on the telly. I was shaking, but I poured the whiskey into the glass, then I just took one Nurofen, then another, then another," O'Meara said in April 2007. Her mother says she’s recovering from her suicide attempt but, “She’s not eating, she’s wasting away.”

Savija threw himself under a train after being voted off the island on an episode of "Expedition: Robinson," the 1997 program that was guided by producer Mark Burnett, who renamed it "Survivor" for the United States run. His suicide led Burnett and other producers to subject potential contestants to psycohlogical testing before casting. Savija's widow Nermina said the 34-year-old "became deeply depressed and agonized. He felt degraded as a person; he was a glad and stable person before, and when he came back he told me, ‘They are going to cut away the good things I did and make me look like a fool to show that I was the worst, the first to go."

The 21-year-old Saha swallowed poison immediately after being rejected as a participant on the Indian reality show. Apparently she brought the bottle of poison with her to the audition.

Tomorrow, "Reality Suicide, Part 2": Psychologists and former contestants talk about what some are calling the Truman Show Syndrome.