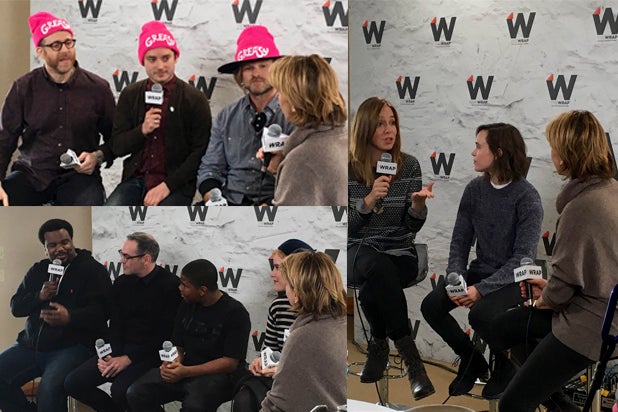 (PARK CITY, UT) January 22, 2016 – TheWrap launched its annual live interview studio at the Sundance Film Festival on Friday, welcoming the top talent to its Main Street location, including Ellen Page, Elijah Wood, Craig Robinson and many others for three days of news-making conversations about independent film.

Partners working with TheWrap this year include Twitter, Kia, Pepsi and Box.  Kia is the presenting sponsor of TheWrap’s portrait studio.

At the studio on Friday, Page addressed the diversity controversy that is gripping Hollywood. “There’s actually no way around it,” she told TheWrap, referring to the lack of acting nominees of color at this year’s Academy Awards. “It’s awful. It’s so upsetting that we’re still having this conversation, but also let’s look also our society right now and the amount of injustice, especially toward people of color. It’s so disheartening, we all have to be doing what we can to make a change.”

The interview space is headquartered at the It’s So Miami Oasis Lounge at 364 Main Street in Park City, where the 10-day festival takes place. TheWrap’s reporters are conducting three full days of interviews with the leading actors and directors appearing in competition at the festival. Real-time video is being posted to TheWrap’s social channels.

In addition, for the fifth year TheWrap is partnering with UCLA’s School of Theater, Film and Television for a panel discussion about the future of independent film in the digital age.

TheWrap will also for the second year convene an Influencer Dinner, bringing together thought leaders for a robust conversation about the future of independent film.

About The Wrap News Inc.
The Wrap News Inc., founded by award-winning journalist Sharon Waxman in 2009, is the leading digital news organization covering the business of entertainment and media. As a multi-platform media company, The Wrap News Inc. is comprised ofTheWrap.com, the award-winning, industry-leading outlet for high-profile newsbreaks, investigative stories and authoritative analysis;PowerGrid Pro, the most current, relevant film development database; ThePowerGrid , an algorithmic, data-driven ranking system for every person, project and company in the film business; and TheGrill, an executive leadership conference centered on the convergence of entertainment, media and technology. The Wrap News, Inc. is backed by Maveron, a venture capital firm based in Seattle, Washington and co-founded by Starbucks CEO Howard Schultz and Dan Levitan.