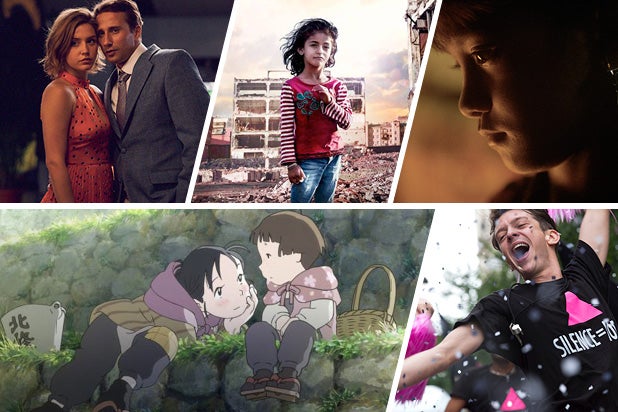 TheWrap is pleased to announce the launch of its 2017-2018 Awards and Foreign Screening Series with the addition of New York City for screenings in partnership with NYU Tisch School of the Arts.

The series in LA launches on October 19 with director Evgeny Afineevsky and his searing documentary about the humanitarian crisis, “Cries from Syria.”

TheWrap’s film series bring together the year’s most notable films in contention during awards season along with the top documentary films from around the world seeking to win Best Documentary film at the Academy Awards.

Also Read: Syrian Activist in HBO Doc on Her Life Now: 'Most of My Friends Are Killed' (Video)

TheWrap has partnered with NYU Tisch School of the Arts and their Kanbar Event Series to offer NYC guild and academy members an opportunity to screen four of the Oscar seasons top contenders followed by live Q&A’s with the talent and directors behind this season’s best films. These screenings will take place at the NYU Cantor Film Theater (located at 36 E 8th St, New York, NY 10003) with select dates during the months of November & December 2017 to be announced.

The series kicks off on October 19 in Los Angeles with Afineevsky and his film “Cries from Syria,” the documentary examines the Syrian civil war from the inside out, focusing on the seven million displaced citizens caught in the middle of the conflict, made up primarily of women & children. The film draws on hundreds of hours of war footage from Syrian activists and citizen journalists, as well as testimony from child protesters, revolution leaders, human rights defenders, & high-ranking army generals who have defected from the government.  Their collective voices try to educate a world that little understands their reality or agrees on what to do about it.

Other films slated for screening in the series include:

In Paris in the early 1990s, a group of activists goes to battle for those stricken with HIV/AIDS, taking on sluggish government agencies and major pharmaceutical companies in bold, invasive actions. The organization is ACT UP, and its members, many of them gay and HIV positive, embrace their mission with a literal life or death urgency. Amid rallies, protests, fierce debates and ecstatic dance parties, the newcomer Nathan falls in love with Sean, the group’s radical firebrand, and their passion sparks against the shadow of mortality as the activists fight for a breakthrough.

“Racer and the Jailbird”

When gangster, Gino, meets fearless racing driver, Bénédicte, it’s love at first sight–passionate, unconditional, fiery. But Gino hides a secret, one that can endanger his own life and the lives of those around him. Gino and Bénédicte are forced to fight against fate, reason, and their own weaknesses to save their love.

“In This Corner of The World,” tells the emotional story of Suzu, a young girl from Hiroshima, who’s just become a bride in the nearby city of Kure during World War II. Suzu’s life is thrown into chaos when her town is bombed during the war. Her perseverance and courage underpin this heart-warming and inspirational tale of the everyday challenges faced by the Japanese in the midst of a violent, war-torn country. This beautiful yet poignant tale shows that even in the face of adversity and loss, people can come together and rebuild their lives..

“White Sun,” Nepal’s submission for the foreign Oscar. When their father dies, two brothers–one the embodiment of tradition, the other of progress–reunite and are forced to reconcile their political differences in light of love and family. Both the brothers and their village must find harmony between old and new belief systems, as they wade in the wake of a turbulent civil war.

There are many more screenings to be announced, stay connected by following @TheWrap on Twitter, and by signing up here for TheWrap’s First Take Newsletter. You can also check out TheWraps screening page at screenings.thewrap.com.

The series is open to subscribers to TheWrap’s First Take newsletter, with preferential seating for AMPAS and other guild members.