“Brick by brick, Georgian film is getting back to its original prestige,” said director Levan Tutberidze at TheWrap’s Screening Series on Wednesday.

Not bad for a film shot on just over $500,000 in 24 days, 10 of them spent on stormy seas in a rusty fishing boat whose net got caught in the propeller, requiring a rescue. “Help arrived with another boat,” said Tutberidze, speaking with moderator and TheWrap awards editor Steve Pond at Los Angeles’ Landmark Theater. “On the way to shore, we filmed the sea.”

Tutberidze said his story of a family’s struggle with poverty and crime in a picturesquely decrepit Black Sea town was influenced by Italian cinema. “There are some elements of neo-realism in the film, but if there’s professionalism as well, I’m happy for that,” he said. 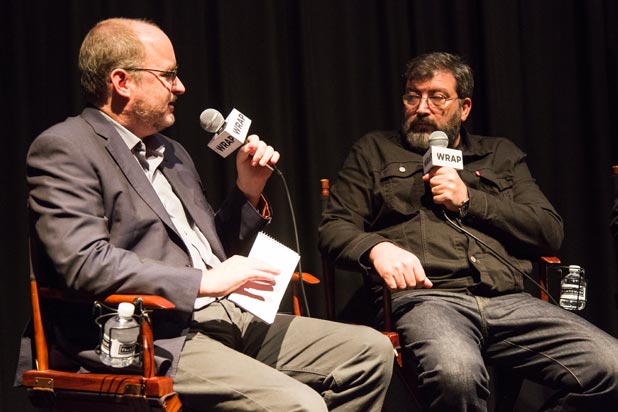 Like Roberto Rossellini’s depictin of Rome in the 1940s, Tutberidze used a real, gritty city for his set — the port of Poti. “Nothing was built,” he said. The family’s story, too, reflects the realities of Georgia. “When the Soviet Union crumbled, the system broke down, and Georgia was affected,” said the director.

In “Moira,” the mother supports her indigent clan as a singer in Greece. “It still happens,” said Tutberidze. “Women go to foreign countries to work, and leave their families behind. Some people left in the ’90s and are still abroad.”

The sons she leaves behind are tempted by easy money offered by underworld figures. “The worst is when the criminal and the police officer have a relationship,” said Tutberidze. “This is a mafia that no one can defeat. I like to develop a sense of a thriller, a story that is unfolding. Today’s films, people pay more attention to the technical side of it, the music, and I believe they lose the feel of the movie. But for me the scenario, the story, is the most important thing.”

Asked whether “Moira” has any affinities with Italy’s “Gomorrah” or Russia’s “Leviathan,” which feature young rural men in trouble with law and the underworld, Tutberidze replied firmly, “No. This is just an independent thought process.”

The director worked two and a half years on the script before he came up with the title, which refers to the Fates (“moirai” in Greek) of mythology who measure and cut the thread of human life.

“I had the whole script, but I did feel there was something missing, like a diamond pendant on a ring,” he said. A colleague suggested the title, which was also used for the sons’ fishing boat, the site of fateful criminal deeds. “It all came together,” said the director.