We've been wondering what that elusive foreign levy payment looks like.

William Richert, the lead plaintiff in the class action lawsuit that reached a preliminary settlement this week, provided us with a copy of a check he received earlier this year, apparently mistakenly, of money owed him for decades.

It's a very interesting case study in what is or isn't going on in terms of accounting at the guild. Hollywood business managers, lawyers and accountants would do well to pay attention.

But even us average folks can understand a pretty simple question that Richert poses:

"Why is a man in his sixties only just receiving royalties for his films, which were due in his thirties?"

That's not all. Richert also sent us the attached list of how this payment was tallied.

Here's a partial glimpse of that, just for fun: 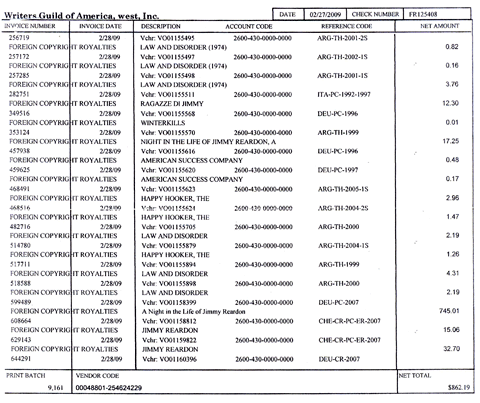 Once you dip in a toe, this stuff becomes curiouser and curiouser.

Why, as Richert correctly asks, is he being paid royalties in 2009 on "The Happy Hook

The guild says it only signed a foreign levy agreement in 1990.

Is anyone buying "The Happy Hooker" since then? The movie was not a union movie. Why does the union have the royalty or foreign levy money?

Richert was being paid for "Law and Disorder," another non-union movie, released in 1974. Hard to imagine anyone is buying or renting that film in this century.

As so much of the case of foreign levies, it defies logical inquiry. Seriously. I've tried.

Most members of the guild probably still don't know that the three major guilds - directors, writers and actors - signed secret agreements with the studios allowing the studios to take the lion's share of funds collected from foreign levies - the taxes on blank videocassettes and DVDs, as well as on actual movies and programs.

Presuming the preliminary settlement of this week is affirmed by a judge on Sept. 21, none of this will be probed any further. Richert seems to accept this, and says that this is the best he can expect to accomplish.

"I have been convinced by two LA Superior Court Judges that my only real recourse is to accept a settlement if the WGA gives one, on behalf of my class."

But still, he writes: "Major studios and unions have been taking funds intended for me and at least a thousand others (they admit to) since the 1960s without any legal jutification and without telling anybody at all until I filed my lawsuit."