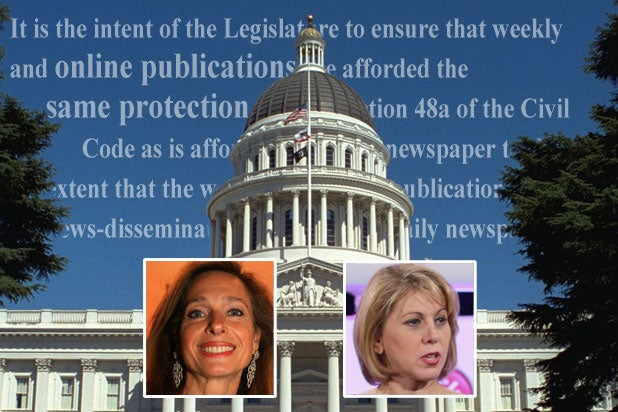 Well, this doesn’t happen every day. TheWrap’s appeal of a lawsuit has prompted a change to a California statute protecting online news sites from frivolous libel actions — a change that was long overdue in the age of the Internet.

On Sept. 28, Governor Jerry Brown approved an amendment passed by the California legislature to AB 998, which covers libel and damages. The statute severely limits damages that can be demanded from a newspaper unless a correction has been demanded in a timely manner. (Here’s the law, by the way.)

The statute has now been updated to include digital news publications to that protection, by changing the wording: “the correction statute applies to weekly and online publications performing the same news-disseminating function as a daily newspaper.”

This is a huge win for all digital publications: Huffington Post, Slate, Business Insider, Re/code – all of us are now protected in California under the same terms as traditional newspapers.

As a result of this amendment, TheWrap likely should have been protected from what we consider to be a frivolous libel lawsuit brought in 2012 by Elisabeth Thieriot, who took issue with an article that said she had been accused by her producing partner of running from Mexico with footage from a disputed documentary about the Mayans. This was one in a series of articles about this documentary that hadn’t previously been disputed.

Indeed, the facts of the story in question have never been disputed. A correction was never requested to any of the reporting. And the lawsuit was thrown out by the initial court in September 2012, which determined it was a strategic lawsuit against public participation (SLAPP).

But Thieriot appealed the decision, and to our shock an appeals court threw out the first decision, saying TheWrap should not to be afforded the same protections as newspapers because the 1931 law defines a newspaper as “a publication that was printed on inexpensive paper, often daily.”

We could not believe it. We asked the California Supreme Court to take the case, and hopefully rule in a way that would define the statute to protect digital publications. Alas, the Supreme Court declined.

But someone was clearly paying attention. An amendment to the law was proposed, passed and approved by Jerry Brown last month.

And a footnote to the amendment explains what motivated the change by the legislature:

1 The amendment to Section 48a responded to a challenge issued by a California Court of Appeal in Thieriot v. The Wrapnews Inc., 2014 Cal. App. Unpub. LEXIS 2690 (Cal. Ct. App. April 15, 2014). There, the appellate court held that California’s correction statute did not apply to allegedly defamatory statements published on a website. The court explained that, “[b]y its plain language, [the correction statute] applies only when the defamatory material is published in a ‘newspaper’ or a ‘radio broadcast.'” Id. at *38. “At the time the statute was enacted in 1931, or amended in 1945, a ‘newspaper’ was understood to mean a publication that was printed on inexpensive paper, often daily.” Id. “Had the Legislature intended the statute to apply to defamatory material published on an online website,” the court reasoned, “it could have amended the statute to say so, or add[ed] a statute to include such websites within the definition of ‘newspaper[.]'” Id. at *39.

This is a welcome and absolutely critical update to the law. All news is conducted online these days, as everybody knows. A shout-out goes to the valiant First Amendment attorney Ted Boutros of Gibson-Dunn who wrote an amicus brief in our bid to the Supreme Court.

Hats off to the California legislature for protecting journalism with the update.