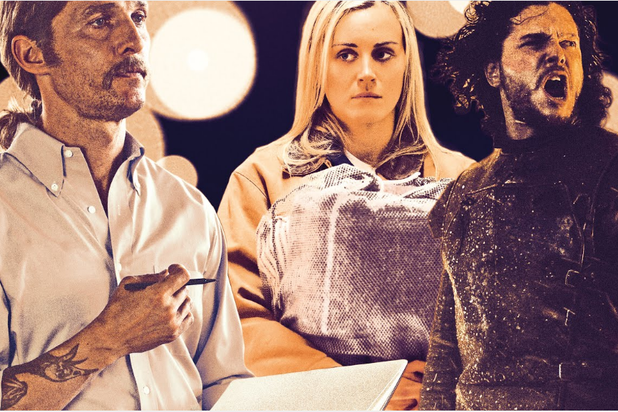 Is it time for the Emmys to shake things up?

The Emmys run the risk of looking stale if they don’t put some statuettes on fresh shelves. Last season, they shook up the Outstanding Drama Series category by finally recognizing “Breaking Bad”, and surprised many prognosticators by choosing “The Newsroom” star Jeff Daniel over three-time winner Bryan Cranston.

They have plenty more chances to surprise this year. And we think they will. Here are our gut-level predictions of who will win in the major categories this year.

Will win: “Orange Is the New Black”
Should win: “Silicon Valley”
HBO’s new “Silicon Valley” deserves to win for being the funniest of the bunch. But that doesn’t seem to be what’s most important to Emmy voters, who love drama and meaning mixed with their comedy. The “Orange” mix of pained emotions and bleak humor should resonate.

Will win: “Game of Thrones”
Should win: “Breaking Bad”
We’re going hard against the conventional wisdom here. So let’s be clear: “Breaking Bad” is the greatest show ever made. Its final season was almost perfect. But Emmy voters may have felt that they rewarded the show’s entire run last year, when they gave the Emmy to the first half of its final season — just as the second half of that season was ending. Some voters may already see the show as a wonderful part of the past.

Earlier this year, “True Detective” looked like the most likely contender to beat “Breaking Bad”. But that was before “Game of Thrones” delivered its most stunning season yet. Non-fans can find the show hard to follow, with its multitude of kingdoms and characters, but this season’s murder mystery and trial gave it an especially tight and forceful narrative. We think Emmy voters will seize this chance to hop on the bandwagon.

Will win:
Should win: Bryan Cranston
Cranston anchored what was, again, the best TV show ever. He deserves a fourth win. But voters probably believe that their feelings about him are already clear. So they’re likely to go for McConaughey, who also won an Oscar this year. He brought irresistible star power to a captivating, decade-hopping performance.

Will win: Lizzy Caplan
Should win: Lizzy Caplan
Caplan seems the most likely to replace Danes, her fellow Showtime star. It’s a way to recognize both the excellent new “Masters of Sex” and Caplan’s difficult job. She infused flesh, blood, and sympathy into a painfully repressed 1950s setting. The role required her to serve as an audience surrogate even as she did things that shocked many modern viewers as much as they did the pearl-clutchers of a half-century ago. She’s the main reason “Masters of Sex” succeeds.

Will win: Louis C.K.
Should win: Louis C.K.
C.K. has deserved a win for years, not just for his acting, but for writing, directing, and editing FX’s “Louie”. They may never award it the Emmy for best comedy, because it deliberately flouts such conventions as straightforward continuity and being funny. C.K. wants to make us think more than he wants to make us laugh, and his “Louie” is a perfectly unassuming, seemingly humble vessel of his big ideas.

This season we saw him fess up to double standards about gender and weight and force a kiss on a woman who truly didn’t seem to want one, sparking an intense conversation about how even supposedly nice guys can do wretched things. It was uncomfortable and provocative, and no one else could have pulled it off. Because C.K. earns his moments honestly, the laughs are bigger when they happen. Part of the joy of his work is the tension before the joke. C.K. took an 18-month hiatus before returning for his fourth season, and his absence may have made viewers’ hearts grow fonder.

Will win: Julia Louis-Dreyfus
Should win: Julia Louis-Dreyfus
Yes, the Emmys can be set in their ways. But this is a case of if it ain’t broke… Louis-Dreyfus has only gotten funnier as her unscrupulous Selina Meyer has gotten closer to the White House. It follows that her funniest season would be the one where she actually becomes president. Poehler, who plays a much more ethical public servant, deserves a win for her role on “Parks & Recreation,” but Emmy voters can elect her for next season, the last one for her show.

Will win:
Should win:
may get some competition from fellow FX series “AHS: Coven,” but no other show has as generated as much critical buzz. This looks like a lock.