We hope you’re not babied-out after last week’s “This Is Us” featured the births of Kevin and Madison’s twins, Frances and Nicholas, and Kate and Toby’s adopted daughter, Hailey, because Tuesday’s episode is even more infant-centric. And possibly even more emotional, if Jon Huertas, who plays Miguel on the NBC family drama and directed the upcoming hour, is to be trusted.

Seriously, the actor says one scene with Jack (Milo Ventimiglia) even had him tearing up. And that makes us just a little bit worried, because in the preview for the episode, titled “The Ride,” we saw what appeared to be Jack buying and drinking a small bottle of whiskey on a pitstop at a gas station while he and Rebecca were taking the newborn Big 3 home from the hospital.

“It’s such a touching story. I was watching Milo [Ventimiglia, who plays Jack] do a scene with one of the other actors and the camera was on Milo and I started misting up,” Huertas told TheWrap. “My eyes started watering because I felt so lucky and so appreciative to be allowed to direct an actor like that, that someone gave me permission to do that was so beautiful and touched me so deeply. The whole experience has just been profound to me. And I think after watching the first act that was fully assembled… I was sitting on my sofa and my wife was beside me and when the act was done, I just started bawling.”

Also Read: Ratings: 'This Is Us' Return Tops Tuesday in Key Demo, but 'Zoey's' and 'Nurses' Drag NBC Down

During the hour, we’ll see not just Rebecca (Mandy Moore) and Jack taking home their bundles of joy, but also Kevin (Justin Hartley) and Madison (Caitlin Thompson), Kate (Chrissy Metz) and Toby (Chris Sullivan), and Randall (Sterling K. Brown) and Beth (Susan Kelechi Watson), jumping through time for some of those storylines, obviously. 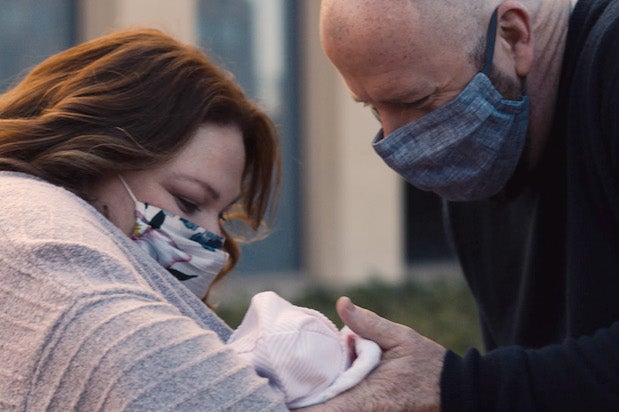 “This episode is about starting new families,” Huertas said. “And we will see across all of the family units that ‘This Is Us’ has created, we will see everyone starting a brand-new family, or a new version of their family in some way or another with a baby, or babies,. And that can be a very stressful thing, bringing home new babies. And every single one of our characters deals with that differently. And we will see the different dynamics between each of our families within the Pearson clan itself, our micro families, from Beth and Randall to Toby and Kate to Jack and Rebecca. And it’s really cool how we have a couple of parallel stories with a couple of our characters. Kevin and Madison are bringing home twins, neither one of them have been parents, it was an unexpected pregnancy. So, I think that’s what we’re going to be dealing with. How do these characters deal with these new situations? And how do they deal with them differently and also very similarly, because they are all part of an overall Pearson clan.”

OK, so if you were paying attention there, then you know that’s a lot of couple plus a lot of babies doing a lot of scenes in cars. Yeah, it wasn’t exactly the easiest episode for first-time director Huertas to start out with.

“The episode was super challenging, but I think that’s going to make it better for me in the long run, because once COVID is gone and we’re back to having normal sets and operations, it will feel a lot easier. But I like being challenged,” Huertas said. “We had Mandy, who was 37 weeks pregnant. We had eight babies. Like, the youngest of babies. Not like a 1-year-old or a 2-year-old, like 1- to 3-month-olds is what we were working with. It was crazy. Then a lot of car work, shooting in and around cars. So it was super challenging, but the episode is so good.”

Also Read: 'This Is Us': Justin Hartley on How Jack Guides Kevin's Journey and If He'll See Madison Give Birth

And though we haven’t seen it yet and can’t personally attest to how Huertas did, “This Is Us” creator Dan Fogelman told us the episode turned out beautifully.

“Jon has been very clear, since the show began, that he wanted a shot directing an episode,” Fogelman told TheWrap. “He’s such a great guy, and is so beloved and respected by everyone, that it was an easy request to honor. The episode he ‘got’ happened to be one of our most challenging of the series – filled with babies and cars and a ridiculously fast turnaround time… all during Covid. He absolutely crushed it. The filmmaking, the performances, the way he lead the set. I couldn’t be more proud of him, nor, frankly, more grateful. He made a beautiful episode of television.” 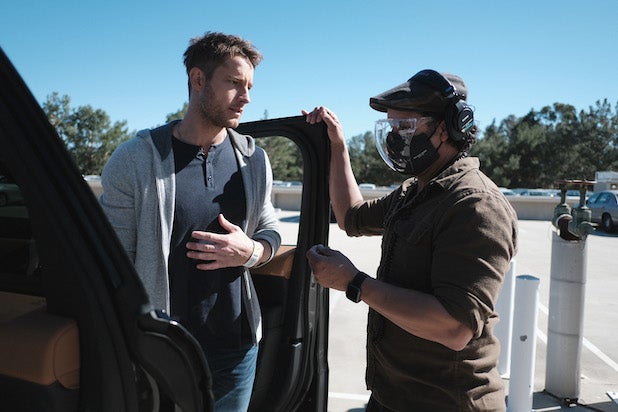 And Huertas was grateful for the opportunity, telling us that, though he might have teared up at that yet-to-be seen Jack scene, what truly made him cry about the episode was watching the first cut with his wife.

“It was about the moment of realization that I’ve been allowed to do this,” the “Castle” alum said. “Because in all of the episodes of television I’ve done, which is around 300 and some episodes, I’ve only been directed by one adult, male Latino. And being Afro Latino and now knowing that I’m going to be able to be there for younger actors who want to see someone that’s had their same experience or that they think may have had the same experience and understand why an actor is making the choices he’s making. To have me on the other side of the camera for that actor, that there is a real possibility for that because of the gift that Dan and all the producers and the studio has given me, I just lost it and started bawling.”