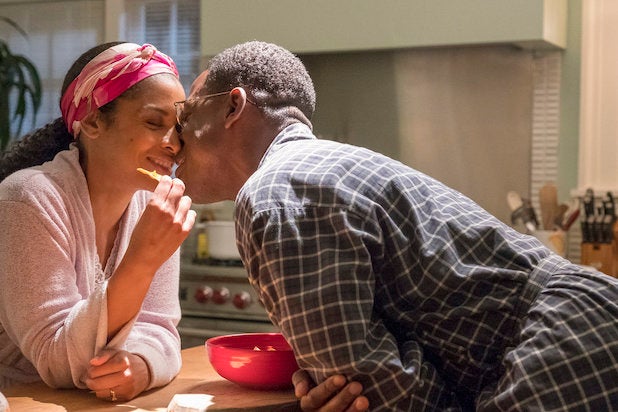 (Warning: This post contains spoilers for Tuesday’s “This Is Us,” titled “R & B”)

Wow. After that giant blow-up between Randall (Sterling K. Brown) and Beth (Susan Kelechi Watson) on tonight’s episode of “This Is Us” — a series of flashbacks recapping Beth and Randall’s relationship, which culminated in the end of a fight that saw Randall storm out on his wife to sleep at his office in Philadelphia — we think a moment of silence is in order.

OK, now that that’s out of the way, TheWrap spoke with Brown about where things are headed for “R & B” — as Tuesday’s episode’s title dubbed them. And, uh, he’s a little worried, you guys.

“I don’t know what is going to happen — and I say that fully tongue-in-cheek, because I do know what’s gonna happen,” Brown told us, laughing. “But as an audience member watching, I am as terrified as anybody else, because I really love this couple. As an African-American, I love the representation of Black love on network television. Like, it’s something we don’t get to see that often. And Randall and Beth, that relationship moves so much for so many people, that to see them struggle, it really does cause the heart to weep.”

Also Read: 'This Is Us': Sterling K Brown Says You'll Know Why They Are Going to See 'Her' By the End of Season 3

While you might be terrified like Brown, the actor reassured us that at the very least you will  discover the fate of Beth and Randall’s relationship come the Season 3 finale.

“By next week, you will know definitively what the status of their relationship is,” he said. “So that will be answered for you in the season finale. Yup, I can say that.”

However, Sterling couldn’t promise us there won’t be more questions when that episode ends.

As for the fight itself — which was set off by that now-infamous voicemail and Randall’s desire for Beth to put her brand-new dance instructor career on hold so they can balance their lives with him in city council — Brown says his experiences with his own wife helped inform that.

Also Read: 'This Is Us': Sterling K Brown on What That Election Result Means for Randall and Beth - And Future Randall and Future Beth

“It’s something I even talked to my wife about. I’ve been married for 13 years to Ryan Michelle Bathe and we’ve had similar conversations, if you will, with regards to sacrifices that women have to make in sort of a hetero-normative relationship that men don’t have to in the same way,” Brown said. “And most of it has to do with once you decide to have a family and the impact that children can have on each one of your individual careers. And it’s such an interesting thing going into it, because you know going into it if we have children in the traditional way, ‘You, my dear wife, will have to carry those children and I will more than likely continue to work while you have them.'”

“But you can have the best of intentions in all of this,” he added. “My wife and I said when she first got pregnant, ‘I’ll stay home with the kids, we’ll make it work, we’ll find a way to make it work.’ And then so my wife gets pregnant and something happens in my career that’s unexpected and my career took off in a really lovely way. And she said, ‘But you said you were gonna stay home with the kids’ and I said, ‘Yeah, but I also didn’t know things were gonna happen in the way that they did.'”

Also Read: Ratings: 'This Is Us' Rebounds From Last Week's Series Low

“So in the very similar way with Randall and Beth — he’s not purposefully trying to force his will on anyone,” Brown said. “I think he’s the most caring, sharing person looking for an authentic partnership. But if you look at the course of the relationship, there are certain compromises that Beth makes in order for things to move forward. Now here’s the thing: She willingly made those compromises. So in his mind, he hasn’t been steamrolling over anyone. He hasn’t been forcing an agenda on anyone. But Beth has been willing to make concessions in order to allow the largeness that is Randall to be front and center. Now with dance, Beth finally has something that she’s as passionate about as Randall is about whatever it is he’s pursuing and she doesn’t want to let that go — and understandably so.”