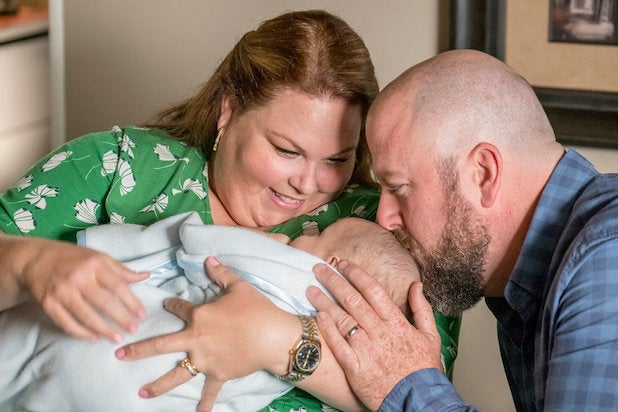 (Warning: This post contains spoilers for “Strangers,” the Season 4 premiere of “This Is Us”)

“This Is Us” fans who were wondering how several new characters introduced on Tuesday’s Season 4 premiere would connect to the Pearson family — whose present-day storyline was barely featured in the episode, “Strangers” — got a few answers by the end of the hour.

And one of those reveals was a bombshell that rivaled the twist at the end of the series premiere: Kate (Chrissy Metz) and Toby’s (Chris Sullivan) baby boy Jack is blind and the adult blind man singing to a packed house at the Greek Theatre, who met for the first time in this episode, is him all grown up.

“We’ve always known for a while now that Kate’s son was going to be born prematurely. And blindness, retinopathy, is a very common thing that would come from that,” creator Dan Fogelman told reporters during a conference call Tuesday. “But we’ve always known that this was where we were heading. It wasn’t kind of a debate about what type of thing may or may not happen as opposed to it was always part of the character and the story we were planning on telling.”

Adult Jack — who we know was named after his grandfather, Jack, of course (Milo Ventimiglia) — is played by newcomer (Blake Stadnik) is a musical theater actor who is blind in real life and has never acted on camera before, who Fogelman says they cast because the show was “looking for a leading man who was without sight and was funny and charming, but also accessible and sweet.”

“He’s a trained actor and done a lot of musical theater and can sing, which was another massive quality that made the search impossible,” Fogelman said. “We wanted to find an actor who could be a leading man, and very handsome and very funny, with his bare ass on national television — but also be able to go stand in the Greek in front of a live audience and actually perform and sing a song. And so there were a lot of boxes to check.”

Oh, that “bare ass” part came during his love story plot with Lucy (Auden Thornton), who he finds out he’s expecting a baby with by the end of the episode. Fogelman promises we’ll be returning to Jack in future episodes, but not right away.

“It’s a difficult area to go to all the time because we’re pretty deep into the future and it presents production challenges,” he said. “But we do plan on returning to it. Right now, it’s not– we have a plan basically, but I can’t get into too much. He will be returned to. Right now, we’re telling the stories in the beginning half of the season that focus a little bit more on the present day stories. But it is a place we’re heading towards the end, multiple times. Especially because we had an experience with the young man who was acting on camera, literally for the first time in his entire life, that was so rewarding for us and we fell so in love with the actor that sometimes those things happen and the parts get even bigger than you were planning on making them.”

Also Read: This Is How Big 'This Is Us' Is on Hulu and the NBC App (Exclusive)

Speaking of the future, TheWrap asked Fogelman during the call when we’ll be going back to the “her” flash-forward that features all the Pearsons decades from the present day, when it appears Rebecca (Mandy Moore) might be suffering from Alzheimer’s.

“For right now, we’re gonna give a lot of answers there this season, is basically the most I can say, especially by the end of the front half of the season,” Fogelman said. “Right now, by having shown the full endgame of where we are without giving all the details, we’ve kind of set ourselves up to start the slow process of telling the story of how we get there. So this is one that will be very answered in this season, even in the first kind of half and two-thirds of the season, to set us up for some bigger leaps and some more time in the future as we get a little deeper into the season and the next.”

Also Read: Tim Matheson to Play Mandy Moore's Dad on 'This Is Us' Season 4

Fogelman and his co-showrunners, Isaac Aptaker and Elizabeth Berger, have previously said that point in the story is as far in the future as the Pearsons’ story will go, which obviously changed with the edition of adult Jack’s plot tonight. But he says it is still their “endgame” point for the series as a whole, especially for the Big 3: Kate, Randall (Sterling K. Brown) and Kevin (Justin Hartley).

“The series was always broken down into kind of two 3-season plans,” Fogelman said. “So obviously we kind of know where our endgame is and now it’s the fun of filling in those details and also when we return there to have a little bit more information that informs those future scenes without kind of jumping all the way through it and showing everything.”

Fogelman says “Jack would be approximately 12 years old in that period we’ve been at with Rebecca [in the future,” so when you see him performing at the concert, that’s “about 10 years+ after” the “her” plot.

“When we talk about like how the endgame of that future storyline that’s already been established with ‘her,’ it’s kind of where the story of our Pearson family — the immediate family, the Big 3 –the family kind of heads toward,” Fogelman added. “But it doesn’t mean it’s the endgame in terms of timelines.”

As for what we’ll find out about new characters Cassidy (played by Jennifer Morrison) and Malik (Asante Blackk), who were also introduced on tonight’s premiere, Fogelman says their connections to the Pearsons will be revealed in due time.

“Obviously, these new characters are framed as characters who are going to have massive impacts on our main family’s lives, so it’s fair to say they are massive parts of this season,” Fogelman said. “They are not just in a one-off episode as the person who was in the room when when Nicky (Griffin Dunne) threw the chair through the window or to meet Deja (Lyric Ross) at a party, it’s going to go far beyond that.”

“And it’s a slow build and part of the intent here was to establish these characters, so that you met them kind of appear outside of the purview of the Pearson family,” he continued. “And now that you really have been introduced to these characters’ stories and you know them, now we slowly start building them into [the Pearsons’] world and see how they affect and really change their lives.”