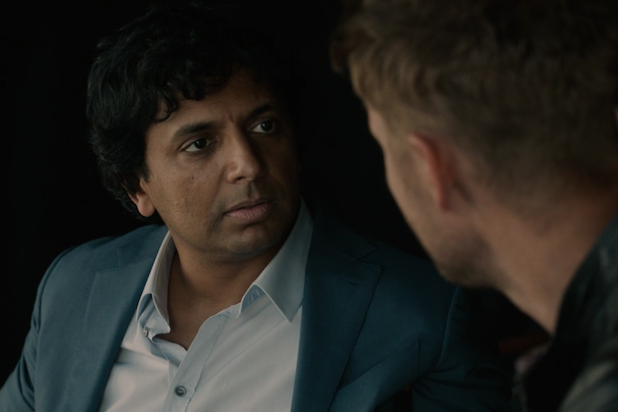 What do M. Night Shyamalan and “This Is Us” have in common? They both love a great twist. That mutual passion brought them together in September when the master of the on-screen twist had a guest spot on the Dan Fogelman-created NBC family drama. While Shyamalan’s scene was quick — he was the director on one of Kevin’s (Justin Hartley) films, the acting gig was a long time coming.

“Well, Dan said, ‘Hey, we might have this thing for you.’ He’s come before in previous seasons, and he’s been super gracious and was saying it’s really complementary,” Shyamalan told TheWrap. “And the format of a show is a lot of reveals and it’s kind of the drama version of telling stories in a different format.”

“It feels right in some aspects, that you’re constantly revealing, revealing, revealing and using the time periods to do that,” he continued. “And [Dan] is a super sweet guy and he was just very persistent (laughs). So I was like, ‘OK, OK, I’ll come!’ So we did that and it was super fun. And we’ll see, there might be another little interesting thing ahead.”

Also Read: 'This Is Us' Star Sterling K Brown on Deja and Malik's Future, Jack's 'Exploration' of Randall's Race

If Shyamalan returns for another episode, he won’t be the only fresh face to make a return in Season 4. So far, series newcomers Asante Blackk, Marsha Stephanie Blake, Omar Epps, Jennifer Morrison, Timothy Omundson and Austin Abrams have reappeared this season.

Come to think of it, it wouldn’t be the weirdest thing if Shyamalan showed up again, seeing as a large part of this season takes place in Philadelphia, one of the filmmaker’s all-time favorite filming locations.

“This Is Us” airs Tuesdays at 9/8c on NBC. Shyamalan’s new series “Servant” launches Nov. 28 on Applet TV+.

'This Is Us' Star Mandy Moore Portraits (Exclusive Photos)

Actress Mandy Moore, "This Is Us"