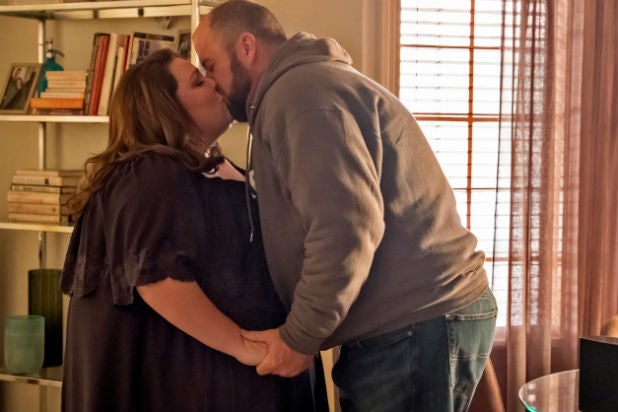 The present-day storylines on “This Is Us” feature two expanding families, and those units went through distinctly different experiences on Tuesday’s episode.

Series executive producers John Requa and Glenn Ficarra told TheWrap that Kate’s pregnancy will take its toll on the mom-to-be, although Toby does what he can to help her maintain a positive outlook.

“This is going to be tough psychologically, and I think Toby’s helping her find the joy in it,” Requa said. “Because she’s had so many self-worth issues that go far beyond her weight issues, it’s just going to bring up a lot of those, and she’s going to have to be processing for episodes to come.”

Kate told Toby two weeks ago about the bun in the oven, leading her beau to delightfully prance around the coffee house. According to Requa, this moment of glee was a pivotal one for the couple.

“That is what she needed — it came about in a very Kate moment, having a moment where she has some joy,” he continued. “It’s just nice for her to having a cathartic moment.”

As for Randall’s family, Ficarra explained that the Deja storyline underscores that Randall was raised to “be determined to do the right thing and make things right.”

Requa pointed out that Randall and Beth “just want to have a great relationship where they’re open and honest with each other, and loving — and that is hard. Doing a good act and just being a good person is hard.”

“Randall and Beth’s dogged determination to make the most out of a situation that is so uncontrollable and oftentimes moving in a very negative direction — it’s pretty amazing to watch, and pretty honest,” Requa continued.