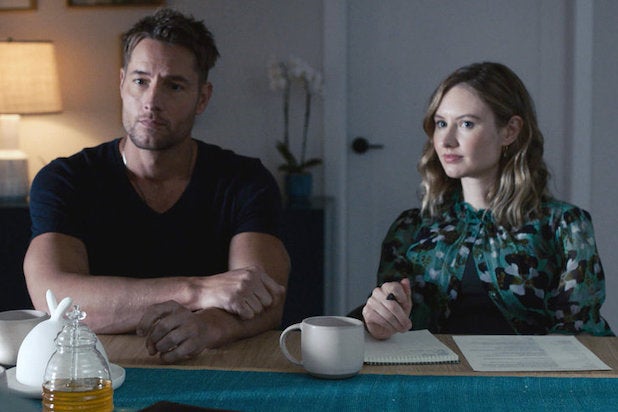 The next episode of “This Is Us,” which was originally scheduled to air Jan. 19 and then pushed to Feb. 2 due to coronavirus-related production delays, has been rescheduled again, TheWrap has learned.

Episode 507, titled “There,” which is the seventh episode of the NBC drama’s fifth season, will now air next Tuesday, Feb. 9. A rerun of “This Is Us” will play tomorrow night in its 9 p.m. time slot.

“No new episode of #ThisIsUs tonight – Covid-related production delays in LA have forced us to delay a few weeks,” series creator Dan Fogelman tweeted Jan. 19, when announcing the initial delay. “But the next few are big ones, and we are close, so we hope you’ll hang in there with us. Sorry!”

Also Read: 65 Biggest 'This Is Us' Tearjerker Moments - So Far (Photos)

“This Is Us” studio 20th Television is one of multiple studios that extended its holiday production hiatuses on Los Angeles-based shows in early January amid spikes in coronavirus cases. “This Is Us” was one of the series affected by the studio’s expanded hiatus, and its broadcast schedule on NBC has been affected as a result.

The Jan. 12 episode of “This Is Us” focused on the backstory of Randall’s (Sterling K. Brown) birth mother, Laurel (Jennifer C. Holmes), and the events that occurred both before and after his biological father, William, thought she had died of an overdose shortly after giving birth to Randall. The hour saw Randall and Beth (Susan Kelechi Watson) go to New Orleans to hear the story from Laurel’s dear friend, Hai (Vien Hong).

The promo for Episode 507 of “This Is Us,” which aired immediately after the Jan. 12 installment, showed Kevin’s (Justin Hartley) car off the road, after it was revealed at the end of the hour that Madison (Caitlin Thompson) was in labor and he was rushing home from Vancouver to make it in time for the birth of their twins.