Two University of Southern California seniors are looking to bring augmented reality — tech combining digital images with your natural environment — into the mainstream as they open pre-orders for a $99 AR headset.

Mira is launching its Prism headset behind $1.5 million in new funding from a who’s who of investors, including Sequoia Capital, will.i.am., and Salesforce CEO Marc Benioff. Prism will allow users to slip their iPhone into the front of the headset and beam AR experiences into its glasses. Using the iPhone as its engine allows Prism to run at a fraction of the cost of high-end AR headsets, like Microsoft’s $3,000 Hololens.

Its two 21-year-old co-founders, Ben Taft and Matt Stern, had been experimenting with ways to bring an affordable AR headset to market — at one point, ordering fishbowls from Amazon and cutting the glass to make its prototype lenses to show to investors.

“As developers, we wanted a way to build and experiment in AR without the need for expensive equipment, and as AR enthusiasts, we wanted the opportunity to play and explore without limits,” Taft said. “We challenged ourselves to build a mobile headset that would make AR accessible to anyone.” 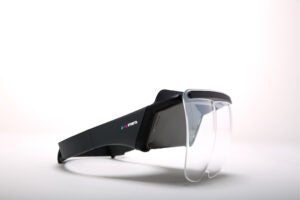 TheWrap recently tried out Prism in Mira’s downtown Los Angeles office, using its accompanying controller to shoot down rogue donuts flying through the air. It was an underwhelming performance by yours truly, but it did crystalize the appeal of AR: its a less cumbersome headset than standard VR hardware, and users are seeing computer graphics appear in the real world right in front of them.

Prism also allows friends with headsets to join in a “shared experience” and enjoy a game together. Much like video games, AR and VR creators are looking to develop experiences with multiple users in an effort to make the medium more social.

“AR is inherently social because of the clear lenses, so you can make eye contact and have a conversation,” Taft told TheWrap. “We wanted to go deeper on that, and that’s why we’ve taken a step further to actually let developers connect those experiences.”

A lack of content has been holding AR and VR back, but Mira is working with developers to have several experiences ready for its users. Stern is also hopeful Apple’s upcoming ARKit — software allowing developers to create AR vehicles for the latest iPhone  — will spur more creators towards making content for AR.

Mira’s Prism available for pre-order here and will ship in the fall.