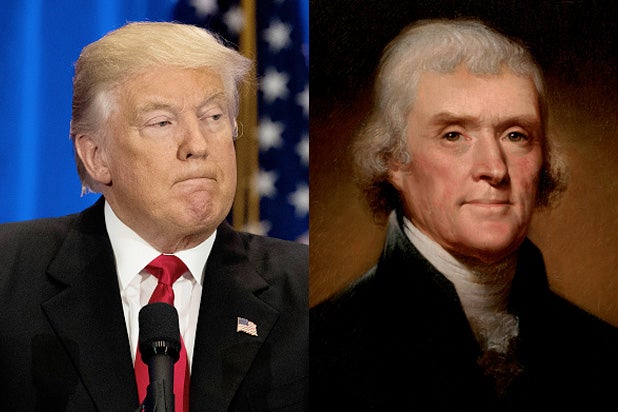 In honor of the Fourth of July, I finally finished Ron Chernow’s massive and masterful biography of Alexander Hamilton, the source of the acclaimed Broadway musical. I learned a lot, and much more than I thought I would about how America’s founding fathers reacted to the French Revolution.

Even as an avid student of history, I’d never given much thought to how American leaders reacted to the French revolution after it turned bloody.

It’s worth considering: We won our independence from the English crown about a decade ahead of the French revolutionaries won it from theirs. But the aftermath of the two revolutions was very different, and instead of recognizing the evil of the Terror, some of our most revered founding fathers reacted in shocking ways.

I was surprised to learn that Thomas Jefferson, the U.S. ambassador to France in 1789 and secretary of state (long before he was elected president), defended Maximilien de Robespierre and his gang of ideological thugs as the guillotine worked overtime and the streets of Paris ran red with blood.

In 1792, after the guillotine was erected near the Tuileries and Robespierre and Jean-Paul Marat rounded up “priests, royalists, editors, judges” and executed 1,400 political prisoners, as Chernow writes, Jefferson and others in his Republican party applauded the atrocities. Some got giddy and went so far as to call themselves “Jacobins,” saluting one another as “citizens.” They excused the bloodshed as necessary evils in the pursuit of liberty.

Jefferson had a stunning response when his former private secretary William Short wrote him from Europe to tell him personally of “those mad and corrupted people in France who under the name of liberty have destroyed their own government.”

Jefferson replied with chilly dispassion. “The liberty of the whole earth was depending on the issue of the contest,” he wrote. “Rather than it should have failed, I would have seen half the earth desolated.”

To him, the goal of democracy was worth the wholesale purge.

Also Read: What If America's Great Presidents Were Women - 5 Actresses Imagine It (Video)

This lack of judgment on the part of a revered founding father, which continued after the beheading of Louix XIV and later his wife Marie-Antoinette, which continued after Marat himself was murdered, made me think of our current political confusion and the challenges of making the right call in turbulent times.

Alexander Hamilton, at the time our Treasury Secretary, did make the right call. He was Jefferson’s arch-rival in the U.S. Cabinet and called out the atrocities with horror. He condemned American apologists and called Marat and Robespierre “assassins still reeking with the blood of murdered fellow citizens,” Chernow writes.

As we all know, American and French revolutionaries were kindred spirits. They were cut, initially, from the same cloth — both upended the ruling political order and established democracies within slightly more than a decade of each other. The intellectual winds of the Enlightenment drove both movements toward individual liberty, equality and independence from a monarchy.

But somewhere along the line, one revolution found a path to political balance while the other veered wildly into barbarism — and ultimately ended up with Napoleon, a streetwise emperor.

We face perilous political times, when a presumptive presidential nominee speaks in extremes and feeds the nativist fears of our electorate. Donald Trump has nothing of the ideological sophistication of French revolutionary radicals, nor the military prowess of Napoleon. But he has tapped into real populist discontent and feeds a visceral desire for retribution, blame and simple solutions like deporting millions of people.

When and where does this veer into violence? It does not seem much of a stretch to imagine such an outcome from his rhetoric.

With Trump, we face the perils of the mob propping up dangerous ideas. We would do well to pay attention to history. With all due respect on July 4th to the author of our Declaration of Independence, we could use a little less Jeffersonian purity, and a more Hamiltonian wisdom. Thanks for sharing your thoughts on the subject below.

July 4th Streaming Guide: What to Binge This Weekend (Photos)

From the new season of “Orange Is the New Black” to the “Back to the Future” trilogy, what to binge over the this holiday weekend