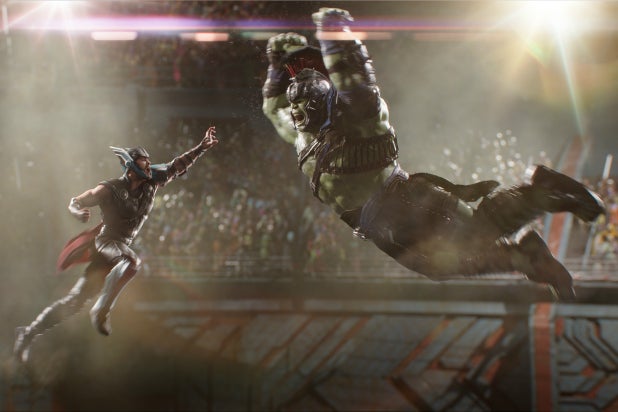 “Thor: Ragnarok” thundered to $14.5 million at the Thursday box office, with previews starting at 7 p.m.

In comparison, “Thor: The Dark World” grossed $7.1 million when it opened in 2013, while last year’s “Doctor Strange” managed to earn $9.4 million in previews. “Ragnarok” preview numbers were just shy of “Spider-Man: Homecoming,” which earlier this year grossed $15.4 million.

Reviews have been stellar: It is currently tied with “Iron Man” (2008) as the best-reviewed MCU film at 94 percent on Rotten Tomatoes.

“Ragnarok,” directed by Taika Waititi, stars Chris Hemsworth and Tom Hiddleston as Thor and Loki, who must team up to stop the Goddess of Death, Hela (Cate Blanchett) from destroying civilization.

“A Bad Moms Christmas” opened on Wednesday and has since grossed $4.52 million at the box office. Mila Kunis, Kristen Bell and Kathryn Hahn return as the three moms, this time rebelling against expectations of having the perfect holiday while hosting their three mothers, who are played by Cheryl Hines, Christine Baranski and Susan Sarandon.

The R-rated film was written and directed by Jon Lucas and Scott Moore, who did the original “Bad Moms” as well. Suzanne Todd produced. It is projected to earn in the high-teens this weekend.