Shortly after Chris Hemsworth shared a photo from the “Thor: Ragnarok” set, Tom Hiddleston took it up a notch and posted a then-and-now photo of Loki and Thor.

“Now & Then,” the actor captioned the image that is a split of the two actors from presumably the first film from 2011 and the upcoming “Thor: Ragnarok.”

On Monday, Hemsworth also posted a photo on Twitter of himself and Hiddleston, dressed in all black, sitting in front of a news stand. “Just sellin papers with my mate,” Hemsworth captioned the photo.

In the background, prop newspapers have headlines including “Has Thor Returned?” and “Villain Loki Spotted.”

Plot details are scarce for “Ragnarok,” but it will feature Thor (Hemsworth) and Bruce Banner (Mark Ruffalo), a.k.a. the Incredible Hulk, working closely together, no doubt trying to stop the end of at least one world.

Taika Waititi is directing, with Stephany Folsom, Craig Kyle, Eric Pearson and Christopher Yost having worked on the screenplay. 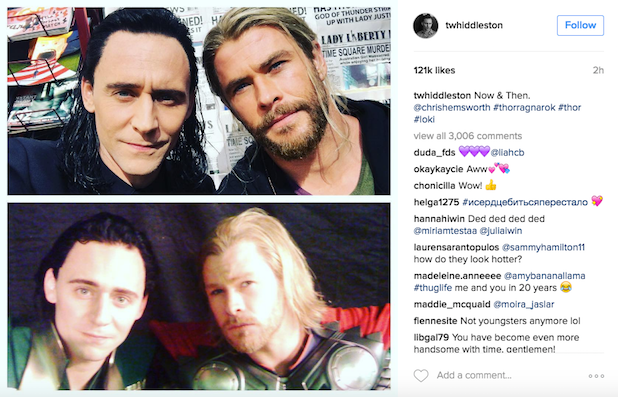