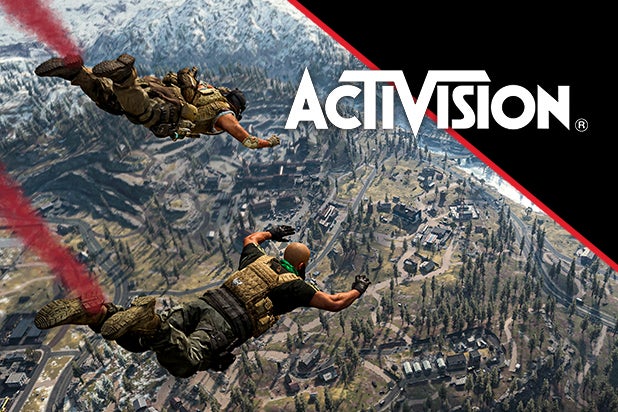 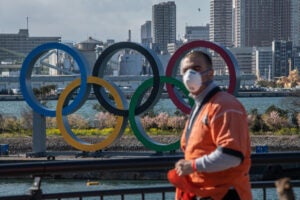 ”The question really is how Activision will adapt,“ Peter Csathy, chairman of Creatv Media, tells TheWrap

One year after laying off nearly 800 staff members in a bid to cut costs, Activision Blizzard Inc. is struggling to regain its footing in a shifting industry.

The Santa Monica-based game developer saw revenue drop by $1 billion in 2019, its first dip since 2015, and entered 2020 with several challenges, including competition from other mobile gaming firms and the need to revitalize aging franchises.

Activision previously projected it would earn $6 billion in 2019, following extensive layoffs. Activision Chief Executive Bobby Kotick acknowledged in the company’s earnings call that the company was falling short of its financial goals. 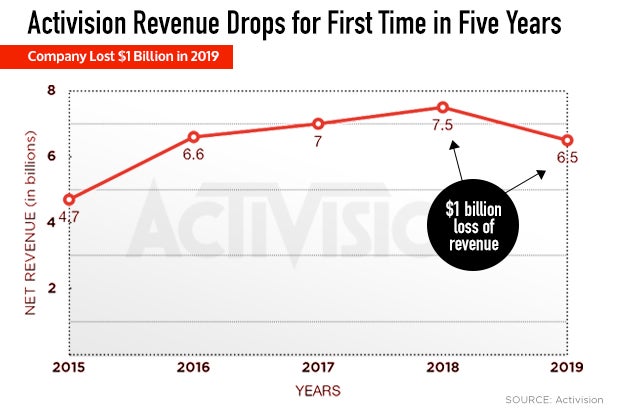 “While we did have record financial results in 2018, we didn’t achieve the reach, engagement and player investment goals we set for ourselves,” Kotick said in an earnings call. “In an industry with great growth prospects, our organic growth over the last few years has not been satisfactory to us.”

Activision and other console-focused game publishers are struggling to adapt to their audiences shifting preferences, which increasingly include mobile gaming.

“In the gaming space let year was a tough one for Activision and (publishers) who were more traditional,” said Peter Csathy, chairman of Creatv Media, a consulting firm that advises gaming companies. “Mobile is coming on fast and free-to-play business modes are beginning to lead the charge. Activision, like others, needs to catch up and transform themselves,” added Csathy.

Three franchises — “Call of Duty,” “Candy Crush,” and “World of Warcraft” — made up 67% of Activision’s net revenues, and an outsized portion of its operating income, the company said. “Call of Duty” is the company’s top performing franchise, and its recently released “Modern Warfare” title has attracted more players to Activision than in 2018, said Kotick.

To the outsider, it might seem odd that such a large publisher only has three successful franchises. But holding tight to several high-performing titles might be an advantage for bigger publishers like Activision, said Yoshio Osaki, chief executive of San Francisco-based gaming analysis firm IDG Consulting.

“If you look at other publishers, they have a smaller, more focused number of titles that have a stronger monetization potential,” Osaki said. “Publishers (now) are hoping games are lasting anywhere from 5-20 years, and we are seeing more examples of games that have significant longevity.”

Csathy agreed that having fewer franchises isn’t a problem for companies like Activision, adding that it’s all about how the company leverages them.

Games often have a long shelf life, Osaki said, pointing to titles like Electronic Arts Inc.’s Madden franchise, which has remained stable after 30 years. The “Call of Duty” franchise was originally launched in 2003. Activision says that the game series continues to retain players and fans of its esport.

The Call of Duty World League esports competition was launched three years ago with 32 teams competing, but re-launched in January 2019 with new organization and under a new name, the Call of Duty League.

Two of Los Angeles’ Call of Duty League teams, OpTic Gaming LA and the Los Angeles Guerillas, hosted a home series match over the weekend at the Shrine Expo Hall at USC, the only local match this season. The two-day league event attracted numerous fans of all ages and a star-studded lineup, including “Black Panther” actor Michael B. Jordan and LA Rams running back Todd Gurley, who faced off in a friendly exhibition match.

Activision retooled the esports league to incorporate a smaller roster and franchise model, with 12 teams (and two in Los Angeles) from across the globe competing for their shot at a $6 million prize. The League’s championship is scheduled to take place in July.

“Engagement is strong …with a substantial pipeline of features, events and content benefiting from over 15 years of Call of Duty releases,” Activision Chief Operating Officer Coddy Johnson said in the earnings call.

Activision has entered the mobile gaming market: It launched a mobile version of “Call of Duty” in October 2019, and the game did well, topping 150 million installs and ending the fourth quarter of 2019 as one of the top 15 grossing games in U.S. app stores, according to Activision internal estimates.

The company noted in its earnings report it is still testing the waters of mobile gaming, saying it’s still in the early stages.

Since Epic Games Inc.’s multiplayer shooter game “Fortnite” was released in 2017, the way gamers interact with their games has fundamentally changed. Fortnite ushered in a new era of instantaneous mobile gaming across platforms, from PC to smartphone, all for free. Other smaller developers like Scopely Inc., based in Culver City, have emerged to develop mobile-only games based on existing popular franchises, like “Scrabble” or “The Walking Dead,” for more casual players.

Apple Inc. and Google are working towards offering more mobile games on their respective app stores, and Google recently launched its Stadia game streaming service and said it plans to add more than 120 games to its lineup, and 10 in the first half of this year.

“We’re in the early days of cloud based gaming,” Csathy said. “That’s why they got in early; it’s land grab time.”

These smaller challengers could end up poaching users from Activision if the company doesn’t come up with more of its own mobile games to compete, Csathy said.

“The question really is how Activision will adapt,” Cstathy said. “To be able to take a console-driven game and adapt that into a mobile environment, that is not an automatic, it’s a different challenge… there’s different engagement on different platforms.”

If the company cannot get itself back on track, it is possible a bigger player in the technology and media industry could look to buy it, Csathy predicted.

“We have to be careful not to assume everybody is invincible. The point is there are no guarantees that behemoths will be here in a decade,” Csathy said. “All companies need to adapt and the games business is transforming before our eyes.”