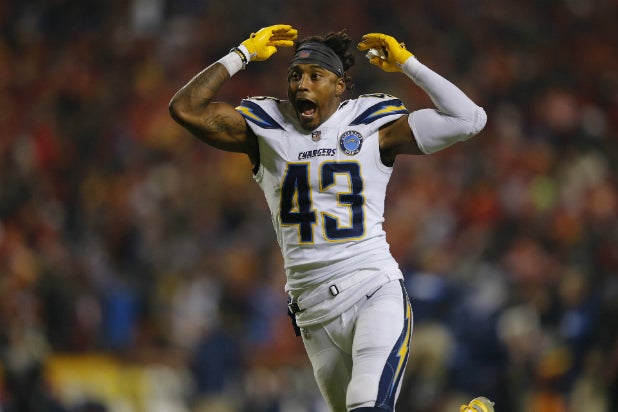 Talk about a walk-off win: Fox Sports’ final “Thursday Night Football” game of the season was a big one, as the Los Angeles Chargers stunned the Kansas City Chiefs to take the lead with just four seconds left on the clock.

With very little primetime competition last night, Fox cruised to a very, very easy victory — very much unlike the one Philip Rivers orchestrated.

With Fox way in first, CBS finished a distant second on Thursday, airing some reruns, the “Mom” fall finale, and an original “Murphy Brown.”

Fox was first in ratings with a 3.3 rating/14 share in the advertiser-coveted 18-49 demographic and in total viewers with an average of 12.3 million, according to preliminary numbers.

ABC was third in ratings with a 0.6/3 and in viewers with 3 million. After an hour rerunning “Disney Prep & Landing” specials, “The Great American Baking Show: Holiday Edition” from 9 to 11 averaged a 0.6/3 and 3 million viewers.

NBC and Univision tied for fourth in ratings, both with a 0.5/2. NBC was fourth in total viewers with 2.2 million, Univision was fifth with 1.26 million.

The CW and Telemundo tied for sixth in ratings, both with a 0.4/2. CW was sixth in total viewers with 1.25 million, Telemundo was seventh with 1.18 million.