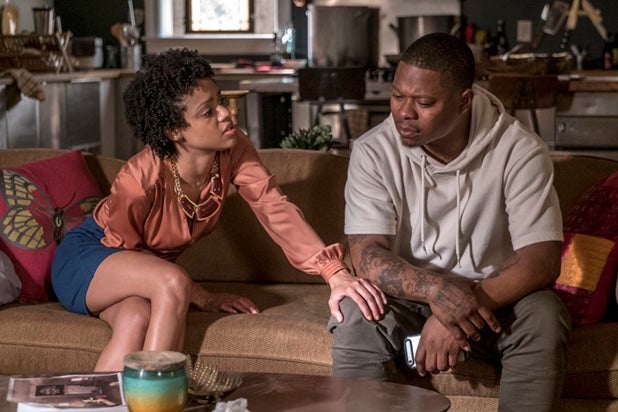 Tiffany Boone took to Instagram Monday to make her first public statement about her decision to leave “The Chi” in the fall of 2018, due to misconduct accusations she made against her former co-star, Jason Mitchell — who was fired from the Lena Waithe-created Showtime series in May 2019.

“You don’t carelessly leave a ‘hit show’ that is praised by your community,” the actress wrote. “I deeply love Chicago and the people of that city who have embraced me. I felt honored and privileged to be part of telling their story. The weight of what I was leaving behind felt like a ton, but the weight of my responsibility to speak up was even heavier. There were people who questioned my decision. How could I be sure I would work again, especially on a project of that magnitude? I wasn’t sure, but I had faith that once I took that leap I could be guided wherever I was supposed to go.”

Boone left the Showtime drama following Season 2, after filing multiple complaints about Mitchell’s on-set behavior. In her post on Monday, she said she made the decision to leave when she realized “not everyone was interested in creating work environment that was conducive to each person feeling safe, seen and heard.” She has since lined up roles on Amazon’s “Hunters” and “Little Fires Everywhere” on Hulu.

“I knew it was a risk, but I feel as if the second I dove off that cliff, there was a hand beneath me lifting me higher,” Boone wrote. “I am overflowing with gratitude for where this journey has taken me.”

Showtime and “The Chi” studio Fox 21 Television declined TheWrap’s request for comment and a representative for Mitchell did not immediately respond.

“It was one of the most difficult decisions I’ve ever made but there is a freedom you are granted when you stand in your truth,” Boone continued. “It is a freedom that allows you to experience things you never thought were possible. It has allowed me to experience myself, my strength and my capacity to love in new ways.”

In a November interview on “The Breakfast Club,” Mitchell — who was fired from the Netflix movie “Desperadoes” over a misconduct accusation just before he was ousted from “The Chi” — said there was “no situation” between him and Boone. Mitchel added that “The Chi’s” former showrunner Ayanna Floyd Davis “made a statement for Tiffany Boone” and  “she was the only person that ever made a statement at all.” He also accused Davis of using the #MeToo movement as a “really ugly weapon’ against him.

Soon after Mitchell was fired from “The Chi” in May 2019, Davis came forward with a statement in which she said Waithe and others involved in the show were “well aware of Jason’s behavior and his multiple HR cases” before his firing from “Desperadoes.”