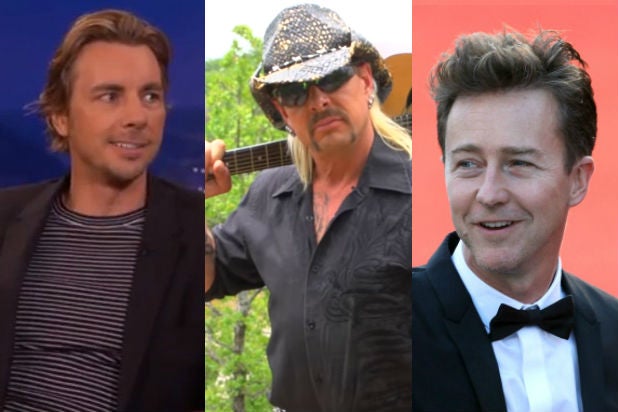 As Netflix’s true-crime docuseries “Tiger King” continues to fascinate the quarantined masses nationwide, Edward Norton and Dax Shepard say they both want to play the larger-than-life huckster at the center of it all, Joe Exotic, in a biopic.

It started Wednesday, when Shepard tweeted, “If I don’t get cast as Joe Exotic in the eventual biopic, Hollywood is broken.” And to be fair, when we squint we can definitely see the resemblance.

Skip ahead to Thursday however, when Norton replied to Shepard. “Um, step aside, pal. You’re way too young and buff and you know it,” the three-time Oscar nominee said.

Luckily, Norton had a compromise for Shepard: “You could probably pull off Maldonado still, actually. Wouldn’t that be fun?”

Those of you who’ve seen “Tiger King” know that Norton is referring to Travis Maldonado, third husband of Joe Exotic, whose legal name is Joseph Maldonado-Passage. (Dillon Passage is his fourth husband.) Maldonado’s troubled life and shocking, tragic death are recounted late in the Netflix show.

It’s a great idea, though Norton is probably kidding since Shepard is decades older than Maldonado, who was 24 when he died. Besides, personally, we’d rather not have to see Dax Shepard have to shoot himself on camera. On the other hand, we think Shepard would be great as John Finlay, Joe Exotic’s second husband, who is heavily featured in “Tiger King” and whose similarly troubled life has for now at least had a happy ending.

Even Justin Long (“Galaxy Quest”) weighed in: “And if @JimGaffigan plays Baghavan ‘Doc’ Antle you can sit next to each other at the oscars!”

While a big-screen, Oscar-eligible biopic may be a long shot, Netflix is planning a limited series starring Kate McKinnon as Joe’s rival Carole Baskin (she will also executive producer).

Make it happen, Hollywood. You know, when all this coronavirus madness is over.