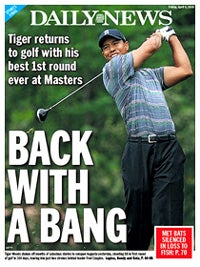 Tiger’s return to gold generated plenty of buzz on Thursday – and viewers.

Based on overnight ratings from the metered markets, SportsCenter’s live show on Thursday from 1-2 p.m. – which included live coverage of Tiger Woods’ first tee shot at 1:42 p.m. – averaged a 0.8 rating.  The 0.8 rating more than doubled last year’s rating for the same one-hour window (0.3).

Online, where fans were able to watch early round coverage before ESPN came on the air, fared well, too. More than 556,000 unique visitors logged onto CBSSports.com on Thursday to watch its Masters Live coverage.

Even Without TV, Tiger’s Trending
Nike Ad Brings Tiger’s Dad Back From Beyond Grave (Video)