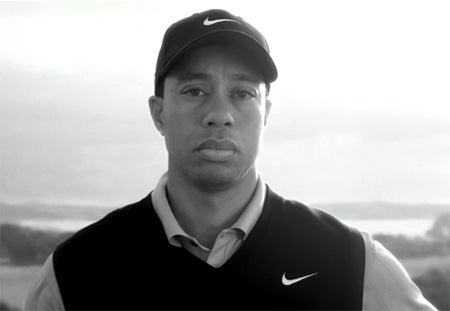 When Nike unveiled a 30-second television ad featuring Tiger Woods and the ghostly voice of his late father, Earl Woods, on the eve of the Masters, it did so simultaneously online.

The ad was purposely scheduled to air on TV for less than 24 hours, but it quickly went viral, sparking an avalanche of criticism, discussion, spoofs — and views — online. According to Visible Measures, a company that measures online video campaigns, the spot was viewed 6,334,337 times during its first week online.

It was a perfect – if dangerous – example of trend that’s been around since the advent of YouTube: if you make a good enough ad, one with some sizzle, you don’t need to spend a ton of money airing it on television anymore, since it gets so viral in a fractured, increasingly digital world.

"It was an execution that could live solely online," said Josh Warner, president of the Feed Company, who called it "quintessential watercooler video."

That is, “Tiger & Earl” had some sizzle.

“The reason that ad worked,” said Michael Learmonth, reporter and digital lead at Advertising Age, “was that it was newsworthy, it was Tiger, and it triggered responses.”

Those responses more or less ranged from swapping out the elder Woods’ voiceover with recognizable voices from Hollywood – like Christian Bale or Morgan Freeman. And, for at least a little while this week, those spoofs became more popular than the ad itself.

Early last week, the New York Times, citing Visible Measures statistics, said “derivative versions” of the Nike ad have been viewed more than four million times – at that point, a million more than the original.

In that sense, the spot, Learmonth said, “represents the pinnacle of the dark arts of attracting viewers.”

"Brands have recognized that if they give something of value to the consumer, the consumer will do a lot of the work," said Warner. "Online, someone tells you about an ad, you search, and it’s there, perfectly indexed. You can’t get that on TV."

Nike and Wieden + Kennedy declined to comment on their strategy for this article.

More than likely, however, Nike and Wieden chose to debut it both on the Web and TV to get the instant, newsy impact from both.

Other campaigns are content to build sizzle — and views — over time online before they even think about buying airtime. Evian, for example, debuted a campaign last year featuring rollerblading babies online.

According to Ad Age, the ads have racked up more than 100 million views and 500,000 Facebook fans over 10 months – and only now is the company behind them, Danone, said this week that the ads have started to run on TV in Los Angeles, with New York to follow this summer.

"While we are expanding into traditional media in order to broaden even further the reach of the ‘Live Young’ campaign, online remains a major pillar of our strategy," Jerome Goure, VP-marketing at Danone, told Ad Age.

“Even if you have an ad that blows up on the Web,” Learmonth said, “to get the big audiences, it takes time.” The “Live Young” campaign’s 100 million views is approaching Super Bowl territory, but “it took 10 months for them to get there.”

In other words, for every Tiger, there are hundreds – even thousands – of cubs that never draw viral blood.

While brand marketers love to spout about “viral,” he said, most don’t have the content to back it up. An ad is “not viral until it goes viral.”

And most ads aren’t “Tiger Woods-caliber.” Which is why some marketers looking to attract online audiences would be better served by buying targeted pre-roll on, say, “Daily Show” clips or on TV than hinging their entire strategy on hope of a hit. “That’s a losing bet,” Van Hoven said.

One thing the Tiger Woods ad did, Van Hoven said, was to disprove the prevailing thought that the 30-second advertising spot is dead. “Tiger proves that is not true.”

Another thing the Tiger ad did was prove that “traditional,” television ads can go viral. A pair of Old Spice ads – also produced Wieden + Kennedy – garnered nearly 10 million views online this week, according to Visible Measures. (One, Old Spice’s “Odor Blocker,” was viewed 7,166,770 times – or about 800,000 more than “Tiger & Earl.”)

Another example: Carl’s Jr. spots – featuring starlets such as Paris Hilton and Kim Kardashian – that reach well beyond the burger joint’s Western U.S. market, and millions of views online.

"There was time that in order to go viral, the thought was you needed a stunt," Learmonth said.

Stunts still happen – such as this two-and-a-half minute ad for Samsung featuring a kid who throws business cards like they were Chinese stars — but they’re not as critical as they once were.

But even when high-production value ads go viral, it doesn’t always mean it’s a good thing. When former “Will & Grace” star Megan Mullally began appearing in a “Can’t Believe It’s Not Butter” ad, singing ‘70s disco classic “Turn the Beat Around" reimagined as "Turn the Tub Around" – the backlash was felt online. (Reactions ranged from "Megan Mullally singing about butter makes me so sad" and "Dear God, why is this Megan Mullally butter commercial continuing to haunt my very existence? Make it go away!")

Not only that, the ads (including extended versions) have been viewed less than 400,000 times on the I Can’t Believe Its Not Butter official YouTube channel.

In terms of viral "hits," those numbers are decidedly not butter.