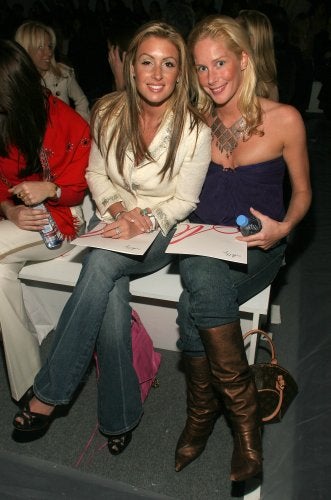 If Uchitel (pictured in center), the rumored Tiger Woods home wrecker, has developed a recent phobia of cameras and microphones, her L.A. attorney is more than ready to stand in the line of fire for her. Wherever there are distressed women in need of a feminist spin, there are Allred’s shoulder pads in camera frame.
Allred not only has an uncanny sixth sense for hearing the approach of news crews, but is a master stage director. Who, for example, can forget last year’s sentencing hearing for “black widows” Helen Golay and Olga Rutterschmidt, when Allred strode into an L.A. Superior Court room and passed out victim statements for members of one of the widows’ victimized families to read, as though they were late script rewrites?
“I wish everybody would leave me alone,” Uchitel, striking a Garboesque tone, had said before decamping Manhattan for L.A. “I am overwhelmed, so I hired Gloria Allred to handle the situation. I don’t want to get this much attention.”
Right. That’s like saying I rented this billboard with my picture on it so people will forget all about me.
After Allred met Uchitel at LAX, the attorney told reporters, “At some point we’ll decide what the next step should be.”
That, no doubt, will be a joint press conference later in the week. This could be the start of a beautiful friendship.
x
Looks like you're enjoying reading