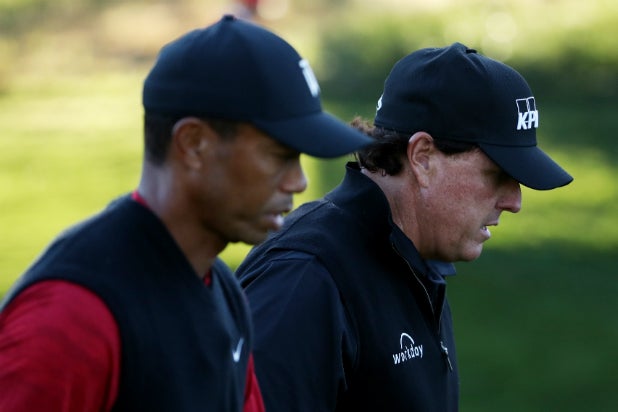 On Oct. 21, Woods, Rory McIlroy, Jason Day and Hideki Matsuyama will tee it up for GolfTV’s “The Challenge: Japan Skins.” The four PGA Tour golfers will compete for a total purse of $350,000, with hole values divided like this:

So yeah, it’s no $9 million “The Match,” but we’ll still watch. (DVR’d, this thing airs at midnight ET and we’re not insane.)

The global event will be available on GolfTV, which carries a monthly subscription in some parts of the world, like the UK and Ireland. In the United States, where GolfTV is not available, “The Challenge: Japan Skins” will be available for free on NBCUniversal’s Golf Channel.

“After discussing The Challenge with Discovery and GolfTV, I wanted to be a part of it,” Woods said on Wednesday. “I haven’t been back to Japan since 2006 and the golf fans there are some of the best in the world. It’s a unique format and a top field with Rory, Jason and Hideki. I can’t wait to play against them on a global stage.”

“I haven’t played a skins format in quite some time, so it will be fun to try something a little different and add a few strategic elements as we compete,” Woods, whose participation here is all part of his mega-deal with Discovery and the GolfTV, continued. “There has already been some friendly banter between us and that will continue until we get to the first tee.”

A “skins” game pitches players in the same group against each other individually over 18 holes. Each hole carries a monetary value, also called a “skin,” of escalating value.

The player in the group with the lowest score on the hole wins the skin for that hole; if two or more players tie for the lowest score, the skin carries over to the next hole. The skins continue to carry over until one player wins a hole outright, which may (and often does) result in a player receiving the money for one or more previous holes that they had not tied for.

If no player wins the 18th hole outright, a sudden-death playoff for the value of the final skin will ensue (but the value will not multiply with each playoff hole). The winner of “The Challenge: Japan Skins” is the player who takes home the most money.