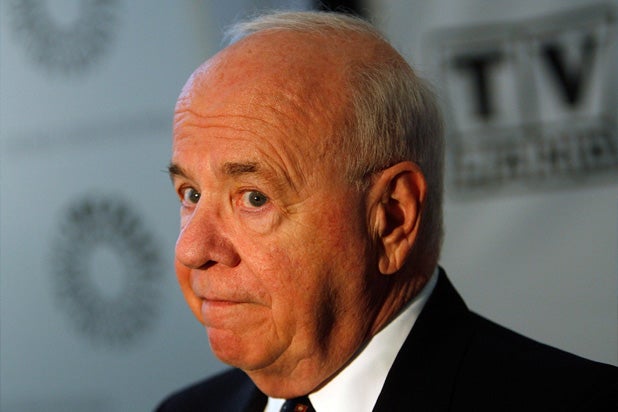 Tim Conway, the Emmy-winning comedian and actor who memorably starred in “McHale’s Navy” in the 1960s and “The Carol Burnett Show” in the ’70s, has died. He was 85.

Conway died around 8:45 a.m. Tuesday morning at a Los Angeles-area hospital after dealing with complications from Normal Pressure Hydrocephalus, according to family representative Howard Bragman.

The comedian, who also voiced Barnacle Boy on the animated hit “SpongeBob SquarePants,” won two of his six Emmys for guest appearances on the ’90s sitcom “Coach” and a second season episode of “30 Rock” in 2008.

But he is best remembered for his outrageous work on “The Carol Burnett Show,” including characters such as the Oldest Man and Mr. Tudball, a badly toupéed businessman who becomes increasingly frustrated by Burnett’s dimwitted secretary Mrs. Wiggins.

Conway earned four Emmy Awards and a Golden Globe for his performance on the sketch comedy series — where his often deadpan ad-libs would regularly cause Burnett and co-star Harvey Korman to break character.

In an interview with the Los Angeles Times in 2013, Conway recalled his first meeting with Korman:

He also starred in two short-lived series with his name in the title and made guest appearances on hit sitcoms like “Married… With Children,” “Mad About You,” “Glee,” “Two and a Half Men” and “Mike & Molly.”

A native of suburban Cleveland, Conway got his start on local TV in the 1950s after a stint in the U.S. Army. He played a sidekick to Ghoulardi, the host of a late-night horror movie show on Cleveland’s WJW played by Ernie Anderson (father of filmmaker Paul Thomas Anderson).

He graduated to “The Steve Allen Show” in 1961 before being cast as the bumbling ensign in the WWII-set sitcom “McHale’s Navy” opposite Ernest Borgnine and Joe Flynn. The series ran for four seasons.

His son, L.A.-based radio host Tim Conway Jr., shared a clip on Monday night of Conway Sr. performing with Doris Day in 1975, hours after the actress and singer died:

Conway is survived by Charlene, his wife of 35 years, his stepdaughter, his six biological children and two granddaughters. Rather than flowers or gifts, the Conway family would like donations to be made to The Lou Ruvo Brain Center at the Cleveland Clinic in Las Vegas, Nevada.