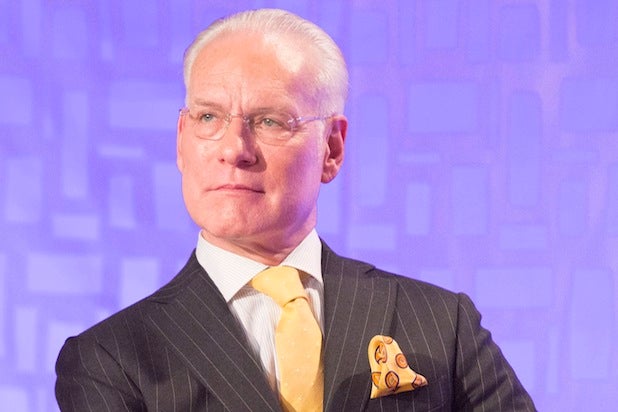 Tim Gunn is stepping into the spotlight with “Project Runway” spinoff, “Under the Gunn.”

“It’s a big deal,” he told TheWrap. “It’s nervous making, to be perfectly honest. I will say this, ‘Under The Gunn’ was so joyous to do. We did it in five weeks, it was so joyous.”

This isn’t Gunn’s first time going it alone. Back when “Project Runway” was still on Bravo, he was the host of makeover show “Tim Gunn’s Guide to Style.” It aired for only two seasons in 2007-2008. Gunn looks back on it fondly but says his new show is a better fit.

Also read: Harvey Weinstein on TLC’s ‘Trailer Park': ‘It Could Be in the ‘Duck Dynasty’ Range’

“As much as I love ‘Tim Gunn’s Guide to Style’ and it certainly was me, that’s not what I do day in and day out,” he said. “I don’t help women improve their style. But having spent 29 years in the classroom, 12 seasons on ‘Project Runway,’ mentoring is what I do, and it’s what I love to do… So for me, the level of comfort with making the show was much higher with ‘Under the Gunn’ than with ‘Tim Gunn’s Guide to Style.'”

On the new show, Gunn reunites with “Project Runway” alums Mondo Guerra, Anya Ayoung-chee and Nick Verreos as they mentor their own teams of designers in a design competition.

“Mondo, Anya and Nick are incredibly different aesthetically and they are incredibly different in terms of personality and also in terms of backgrounds,” Gunn said. “What they share in common is a belief in helping people succeed, in fact a tenacity about it, a desire to communicate effectively, and a desire to be on the show. That was a big commitment for them and they all have careers.”

The designers were certainly nervous about joining the show, which forced Gunn to give them a little shove in the right direction.

“I certainly had to get involved in the recruitment, because I had to get on the phone in a couple of cases and persuade,” he said. “Like ‘No, you really need to do this!’ And it’s a competition for them too, so they said, ‘What if I lose!?’ And I said, ‘Well you can’t come into it with that attitude. Why do you think you would?'”

Being the first season and not as produced as Gunn’s previous show, he said that things do get a out of control while the cameras are rolling.

“I actually put rules in place, saying I didn’t want to do this but there are now rules,” he said. “You may not do X you may not do Y, you must do the following. And it’s really only to help them and to help their designers.”

He said that executive producer Sara Rea “and I were constantly blown away by where it did take us. By the arcs, by the highs, the lows, the emotions. We kept turning to each other saying, ‘You can’t make this stuff up.’ And you couldn’t script it! Because you’d fire the script writer, saying, ‘This is impossible, this can’t happen.'”

“Under the Gunn” premieres Thursday at 9/8c on Lifetime.