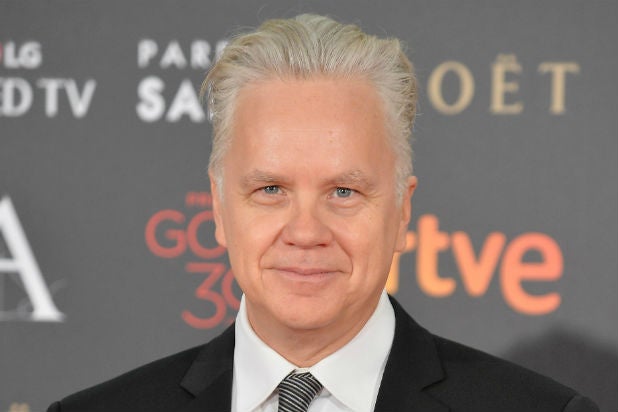 Tim Robbins used an American movie classic to criticize President Trump as a “child abuser” and a petulant bully in a blazing acceptance speech on Friday.

Accepting a top prize from Central and Eastern Europe’s Karlovy Vary International Film Festival, Robbins said a failed audition earlier in is career for “Back to the Future” helped him frame the current state of discourse in his native country.

“This guy named Robert Zemeckis was directing a movie called ‘Back to the Future’ and I auditioned for the role of Biff. The arrogant, childish bully. The petulant, overgrown child monster. I got close, but I didn’t get the part. I could have been Biff. So why was I thinking about this movie?” Robbins said, accepting the festival’s Crystal Globe award for impact on world cinema.

“It occurred to me the other day that we are living through a Marty McFly moment. [The film] was set in the 1980s and, thanks to advances in technology, a DeLorean car could travel through time and brought our lead character Marty McFly back to the 1950s. What he found … wasn’t a romantic, nostalgic time but an Oedipal nightmare. A time of bullying, a time of intolerance and ignorance,” he continued.

The comments come on the heels of a few chaotic weeks in Trump’s White House where uproar over family separation at America’s borders, the midterm elections, the shocking resignation of a Supreme Court justice and on-going corruption and election tampering investigations are not in short supply.

“Despite our freedom and liberation from intolerance we somehow, through the cynical use and manipulation of advancement in technology and not a DeLorean car but a device we can hold in our hand, have traveled back in time. We have not gone back to the future, we have gone back to the 1950s,” Robbins said.

“Are we puppets of propaganda that appeals to our spiritual weakness and our jealousy of others? Bullies have no power without fear, so at this Marty McFly moment, we artists … have to figure out how to get back to the future. Fix this broken DeLorean car and get back to the world of progress,” the Oscar winner said.

Robbins concluded that significant change won’t happen “on your TV or cell phones … those that have taken us back the the ’50s have already controlled the programming and algorithm that delivered us to the child abuser in the White House and [to] gigantic tax breaks for the wealthy. This new revolution has to come from our hearts.”

While Robbins never got to play Biff, the festival did celebrate some his notable roles like “Bull Durham,” “The Shawshank Redemption” and his Best Support Actor Oscar turn in “Mystic River,” in addition to his directorial efforts like “Dead Man Walking” and “Bob Roberts.”

Robbins will be the festival’s guest all week, and even jam with his band in the spa town outside of Prague on July 4.