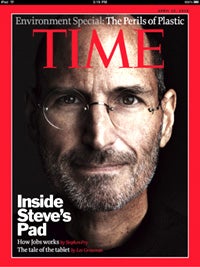 Some users of Time magazine’s website have noticed that it has begun walling off parts of some articles that appear in the print version. Last month, Felix Salmon noted the magazine had begun doing this, and today the Nieman Lab pointed out more.

The articles are teased with a note:

“The following is an abridged version of an article that appears in the July 12, 2010, print and iPad editions of TIME.”

I asked Time if this was a change in policy, and harbinger to a future paywall. A spokesperson for the magazine responded via e-mail:

There continue to be some stories from Time magazine available on time.com — in addition to all of the online-only content the site produces — but full magazine content is only available in print or on the iPad app. It’s been happening for several weeks as has been reported.

And you may already be aware that magazine articles represent very little of the overall content on Time.com, which for a very long time has been a 24/7 site with 90% original content. We've also recently launched Newsfeed on the site, which has 20 to 30 original posts a day.

The statement is similar to the one Time Inc. gave to Peter Kafka at Media Memo.

It’s also worth noting this policy differs from a paywall, in the sense that there is no “pay” option – the magazine wants you to buy the print or iPad edition to access the content, not via your PC or laptop.

But that’s not to say Time is against a paywall strategy. Time Inc. EVP John Squires led a consortium of publishers – including Condé Nast, Meredith and others — to form Next Issue Media, a yet-to-be-launched digital storefront for magazines.