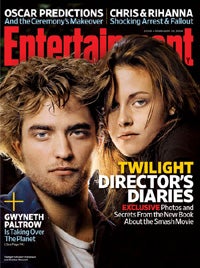 For Time Inc. employees, the silver lining in the latest round of restructuring – which will include up to 500 layoffs – is that no magazines will be closed. At least, not today.

During a conference call with investors Wednesday to discuss its earnings, Time Warner chief Jeff Bewkes said that Time Inc. “will continue to take a hard look at our least profitable titles.”

Translation: Watch your back, Entertainment Weekly.

UPDATE: It appears at least one magazine — Fortune Small Business — was shut down today, although Time Inc. did not consider it a core property. It was a custom title, the company said. All FSB 11 employees were let go.

Despite this, Bewkes did his best to sound bullish on print. “We believe the downturn in advertising is cyclical,” he said. “More people read Sports Illustrated than watch the World Series.”

Bewkes said that while Time Inc. is lowering the frequency of Fortune, for example, it is refocusing “our reporting on the largest and most important companies.”

He also tried to distinguish Time Inc.’s 2008 restructuring – which resulted in roughly 600 layoffs – from the restructuring announced by the company today. This round, he said, “is much more targeted,” and will mainly focus on its news groups – which includes Time, Fortune and Sports Illustrated.

According to this document filed with the New York State Dept. of Labor, Time Inc. said it intends to cut 280 positions by the end of the year. As Media Decoder notes, this is the "first hint" at hard layoff numbers we’ve seen so far.

UPDATE #2: Here’s Time Inc.’s statement on the news today: "As Time Warner noted in the 3Q results announcement earlier today, Time Inc. has begun a restructuring program that will result in a charge of up to $100 million. While advertising remains challenged, readers continue to value print publications and affiliated websites. This restructuring will allow us to most efficiently focus our resources on the creation of compelling content at our world class titles. Unfortunately, given the tough market conditions, this restructuring will mean a loss of jobs. We wish our departing colleagues and friends the very best with their future projects."

UPDATE #3: Business Insider says 11 staffers were cut at Entertainment Weekly (four editorial and seven on the business side) and buyout volunteers are being sought at various titles, including People.