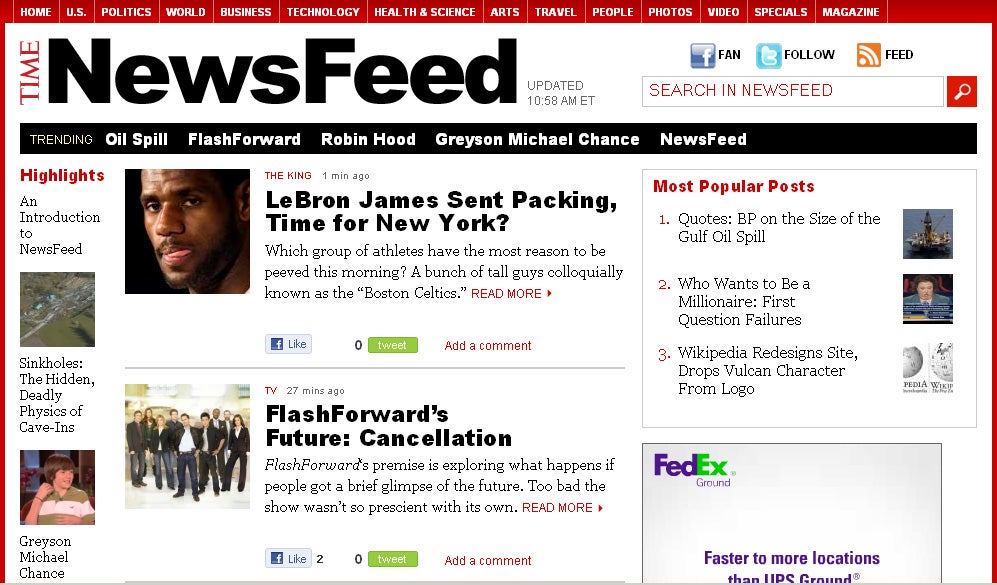 Time magazine – the newsweekly currently not for sale – rolled out a new, Facebook and Twitter-inspired website on Friday called “Newsfeed.”

The site (newsfeed.time.com) appears to be an edited stream of Time stories and aggregated others that are “trending” – on Google, Facebook, Twitter and other social sites – presented in blog-like reverse chronological order.

In a release, executive editor Dan Eisenberg offered a few more details: “We are going to be agnostic about who we’re linking to. We are mostly interested in the best content out there, but we will always offer an original take beyond what has already been said.”

More: “The site will put breaking news and online memes into perspective as they happen, giving users the latest on the oil spill, showing how many Facebook users have signed on to support Betty White hosting the Academy Awards and answering why Justin Bieber is a trending topic on Twitter every single day.”

Newsweeklies, perhaps more than other magazines, are increasingly looking to experiment with social media beyond the like and share buttons on their homepages. Newsweek was one of the first magazines I can think of to open a Tumblr account. And it’s as breezy as Tumblr accounts that don’t have a huge, struggling media brand behind them.